Susan Mac Nicol was born in Leeds, UK, and left for South Africa when she was eight. She returned to the UK thirty years later and now lives in Essex. Her debut novel Cassandra by Starlight, the first in a trilogy, was published earlier this year by Boroughs Publishing Group in the US. Sue’s latest story, Saving Alexander is her second m/m romance.
Sue has written since she was very young, and never thought she would see herself being a Romance writer, being a horror/psychological thriller reader all her life. But the Romance genre is now something very close to her heart and she intends continuing the trend.
Sue is a member of the Romance Writers of America and the Romantic Novelists Association here in the UK.
To learn more, visit Susan on her website and blog on Twitter, Facebook, Goodreadsand Pinterest.
Susan Mac Nicol is also author of The Magick of Christmas, Confounding Cupid,Cassandra by Starlight , Together in Starlight and the best-selling Stripped Bare. 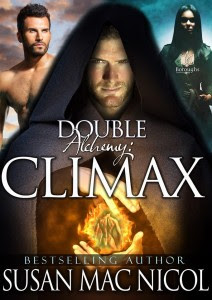 Powerful modern warlock Quinn Fairmont found ecstasy with the silver-eyed and not-quite-human Cade Mairston, but to know true happiness the pair must best both the shadow of a long-ago lover and an ancient enemy who seeks to destroy love, light and all they hold dear. A BLINDING LIGHT It begins with a Book of Shadows discovered by a London coven. The grimoire is as dangerous as it is rare, which is why it evokes modern-day warlock Quinn Fairmont’s desire. He collects objects of great power and beauty—like his lover, Cade Mairston. Against all odds he and Cade found each other, but their perils have just begun. First is the ex-lover who once held Quinn in thrall. And, someone has been killing warlocks. Could it be one of his own kind? There are those too who would challenge Quinn’s power in their quest to overthrow him as Grand Master. Or is the danger something darker, something invoked inadvertently, rising from the shadows, building from the very inside of a man until it brings an end with a quick flash of light? Of the truth, the surface has only been scratched. Now Quinn and Cade must go deeper and find both answers and an end. They must learn what lurks in the hearts of men…and whether it seeks to love or destroy.

When Double Alchemy ended, Quinn and Cade found peace in each others' arms and they loved. They had beaten some enemies but there was still that ancient enemy, the Witchfinder General, on the loose and there was no finding him. There was also Quinn's reluctance to reveal his secrets, to finally open up to Cade. Cade was patient but it disturbed him knowing his lover had secrets and there were the nightmares that were not only increasing in frequency, they were getting rougher as time went by. Quinn had a lot at stake, but he was never letting his Cade go.

As Climax opens, the path to discovering the Witchfinder General is finally revealed, but it is a deadly path that puts the world of witches and warlocks at risk. The discovery of a grimoire by a witch's coven may just be the solution, but Quinn needed the dark book in his hands first. Unfortunately, that meant having to face off with Valensia, the Regina of the Witches herself.

Then of course, there was the Consortium. Being Grandmaster of the Warlocks was not an easy position. Just like any political post, this is a status envied by many but feared by most. It is also a position that is open to many intrigues which occupy Quinn's daily life. Will his love for Cade be a hindrance? Will Cade, once discovering what Quinn was capable of fear and doubt him? What does Quinn have to do to hold on to the Consortium and sitll be the lover and partner to Cade.

Then there is the complication of Cade's feyness. What can happen next?

Climax is the second and final installment to the Double Alchemy mystery. The world where warlocks lived with their withinners and witches with their covens. A world where magyckal people and creatures lived side by side with humans and other fey creatures, both within the present time and its alternate. This is an interesting sequel to a paranormal, fantasy, mystery, thriller. A curious tale filled with intrigue, magyck, deaths and more. Susan Mac Nicol has managed to create a world fans of paranormal and fantasy are sure to love. With the first book establishing the background of all things to come, Double Alchemy: Climax is a sure fire winner that will finally put a closure to the relationship between a warlock and a fey/human; with side characters who are an interesting blend of anti-heroes/heroines, allies and foes. Together, they fight side-by-side, to defeat a common enemy. They will stop at nothing to keep their world secret and safe.