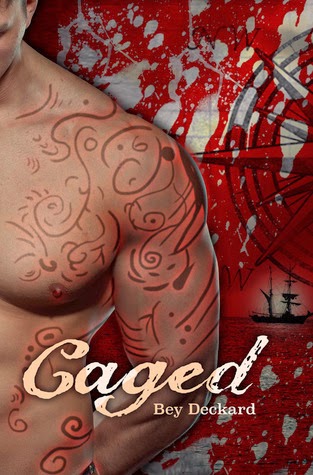 Sheltered and lonely, Jon's life changes drastically when a strange ship sails into the harbour of his small port town one day. Trapped between the possessive pirate captain and his murderous first mate, he must learn to adapt or he will lose himself completely. An epic tale of love, treachery and revelation, this first installment of the Baal's Heart trilogy brings you into the lives of three men so bound together by jealousy and lies that they must sail to the very ends of the earth to find forgiveness.

Deckard's first novel is a masterful portrayal of sorrow, hope, and passion, with a narrative that twists the reader through a world set in the Golden Age of Piracy. A thrilling look into the darker side of human nature, Caged effortlessly melds serious historical fantasy with five star erotica.

I am at odds on how to approach my review for this book. This was huge in terms of plot and character development. Caged: Love and Treachery on the High Seas is the first installment to the Baal's Heart series. This is an action packed pirate swashbuckling mega-adventure set in times gone by. This is also far from a romantic story. Instead, I see this as a story of three men who survived through all their life's experiences and made do.

Take Jon: he took me by surprise. He first came out as weak and the obvious submissive, but he just turned the tables on everyone, including Baltsaros and Tom. He was sick, dying almost, and agoraphobic. Yes, he worked in the dungeons being an empath and did socialize with the inmates. However, he was naive on everything else and he cried at the drop of a hat. He was also very young. Then when the going got hot and readers thought they had him pegged, he just turns tables on everyone and fooled all. His is a very strong character, hard to nail.

Then there is the Pirate King, Baltsaros. Him, I look on him as an anti-hero. He is one man whom I can easily label a psychopath. He is a very, very manipulative and lethal character. He could kill without thought, without hesitation and lie without batting an eye. He makes Michael Corleone look like a saint. He is educated, suave and seriously deadly. And yet, just like any of that kilt, his ability to open his heart and soul to Jon was beautiful. So, of course, I fell in love with him.

Then there is Tom. This guy is insane. He is just plain crazy. But for all of his size, gruff, and being deadly at a glance, he has needs only Baltsaros and Jon could fulfill. He opens his heart and soul to both men and submits to their whims and just becomes a highly enjoyable and beloved character as well.

where this life was romanticized to the point of ridicule. Deckard has written an astonishingly blunt pirate-based book written from the perspective of a privateer and it is not romantic, it is not even a tad beautiful. It is a violent life full of life-threatening danger and a total disregard of anything moral or even religious.

Once I took this up to read, it was impossible not to get ensnared in the complexities of this story and this is just the first book. To be honest, I am freaking scared of the next installments but just like any curious cat, or dog, I could not refuse the next read. So yes, definitely looking forward to this series, scary it may be to me.