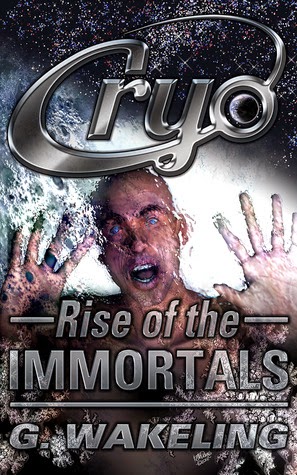 
John's life is ordinary. Whilst skyscrapers soar towards the heavens, leaving a dying Earth far below, John has little to enthuse him about the modern world. He's the black sheep of the family, the recluse, the one who never did anything worthwhile. That is, until John wins an elusive ticket to the CRYO program. Within seconds, his life explodes in a flash of cameras, notoriety and intrigue.
The chance to sleep for a few decades and wake in a new world, a place where life might be better, is all that John can hope for. But, is CRYO everything it says it is? Is the promise of a prosperous future unfounded? Only time will tell, as John becomes one of 50 new immortal souls to ride out the journey of time...


Rise of the Immortals is a fantastically real dystopian novel! Geoffrey Wakeling has woven together a tale of how things could be if we don't take notice, stand up, and change. Uncontrollable pollution, genetic modifications, overpopulation ... these sound like the usual headlines for today but these could well change the world for the worse if not taken seriously.

Stuff like controlled climates sound good until you stay in them for real. Could you imagine living in an artificial environment like the Venetian 24/7 with even your sunrise and sunset computer controlled for you? That is what John's world looks like. No wonder he would risk death by cryogenics to escape it for a better chance in the future.

Not everything about his world is awful, though. But the more he discovers after he wins his ticket, the more he realizes that important information has been kept from everybody. How people survive in the lowest levels of London, for example, amongst sewers and exhaust pipes. About how badly the deterioration of the world is escalating. Even about how sure they are of the Cryo program succeeding. Suddenly, medical breakthroughs such as regrowing lost limbs or controlling aging, or enhancing learning seem very small rewards for such a big price.

That drives him to leave his family, his best (girl)friend, and everything he knows to take that risk to shoot himself to a possibly better world.

It's unusual (for me, at least) to find a dystopian novel that has a fantastical yet real vision of the future. Could the picture painted here truly happen? Yes, if based on a view supported by numerous scientists. But you don't need to rely on scientists to see it. Food production is down because insects are dying when exposed to pesticides. Pollution is causing more illnesses and blocking out the sun in major Asian cities. Garbage shipped from first world to third world (lowest levels?) countries. Extreme weather, unprecedented natural disasters like earthquakes and volcanic activity, the list goes on and all these together are enough to change our world beyond recognition.

However, none of us have the option to time travel into the future. And even if we do, exactly what will we find? The only option is to rescue the world we do have, put our bad habits into the nearest available cryo port, and jettison it into oblivion.

Did reading this book make me angry? Yes, and frustrated with the rate things are changing in the world. That only goes to show how well Geoffrey Wakeling wrote Rise of the Immortals. You lose yourself in his view of the future and then hope you'll have a better go of it - after you swear to improve the world you have right now.