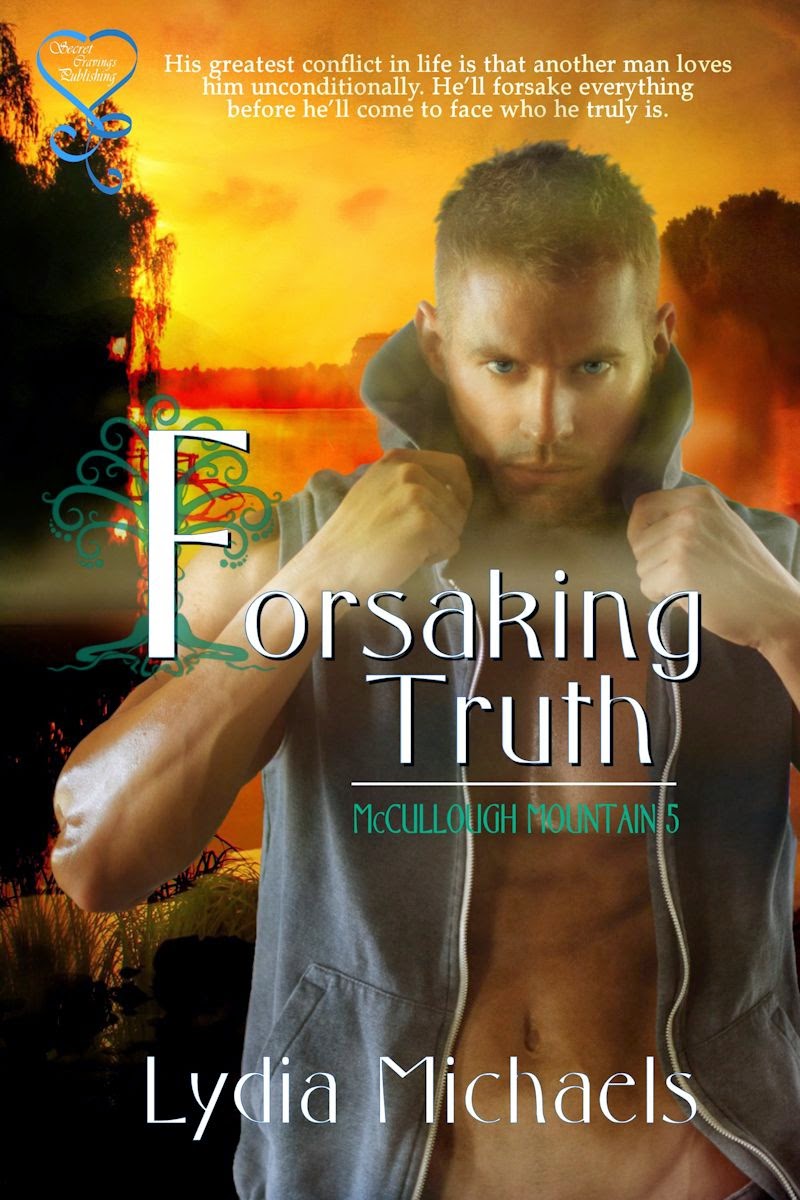 When Luke McCullough’s athletic potential is diminished by a field injury, his pride pays the price. Returned to Center County a broken man, the long road to recovery seems dreary and overshadowed by opportunities lost, until he meets Tristan Hughes.

Tristan came to Center County to escape his past and start anew, but nothing prepared him for Luke. Intrigued, Tristan cautiously gets to know this powerful man, only to fall head over heels for the vulnerable soul hiding behind all that intensity and drive.
Luke has never been interested in men, so when he can’t get Tristan out of his head he doubles his efforts to fight the inevitable. Stolen glances lead to heated encounters, followed by punishing regret, but Luke’s inability to face the truth of who he really is may cost him the only happiness he’s ever known.

Forsaking Truth took almost seven years to tell. The fifth installment of the McCullough Mountain Series, this is the story of Luke McCullough and Tristan Hughes. The best friends who were really partners and lovers. The lovers who hid from all for fear of condemnation.

Luke is an angry man. He is angry for having lost his chance of becoming the athlete he lived for. He is angry that his siblings were seemingly getting the chances he thinks he should have had but never will. When he meets Tristan, he gets even angrier at having to face himself in the mirror, unwilling to accept who and what he really was.

Tristan had always known he was gay but his best friend and lover turned on him when they were caught by his father. It did not take long before he realized that he was losing everyone. As soon as he could, he got out and never looked back. Then he meets Luke and things fell into places he never thought they would. He meets the love of his life, but he could never publicly claim the man as his.

The story of Luke and Tristan was really an affair. It was a secret both men strove hard to keep from prying eyes, even from their families. Pretending to be someone whom they were not for almost seven years was painful to endure and it was really taking its toll on their relationship. What will it take to make both these men realize they were meant to be together?

I have to be honest, when this was offered up to me for review, I was just shaking my head. I knew author Lydia Michaels was a good writer, but to attempt to write an MM novel? Out of a character that had been brewing in the background for four series installments? I did not know what to expect.

Let me make something clear: I have never read the series before, never even heard of it. Is that blunt enough? Thing is, what scared me most was having to read an MF author write an MM book. That scared me but I should have known to trust this talented writer to not only succeed in her endeavor, but to guarantee that readers such as I would never once get lost within the mystery of the series. All I know is that this story encompasses what had already obviously been written about, but with this installment, all those questions left hanging are finally answered.

We have two angry men and the things they did to get to the HEA of their love affair was quite an eye opener. The author did not hold back with this one, in terms of character development. Both men were simply and obviously imperfect. Both of them had a lot of faults, there were times I just wanted to drop the book and scream at the two then realized that this was the point of the whole read. My getting agitated meant that these two men were getting to me.

My relationship with the two men would best be described as love-hate. I loved their commitment to each other and yet I hated the way they handled things. And their egos. Wow, if they could just drop their egos a bit they would have been really lovely, but these two are typical men with matching sky-high male egos! Not to belittle men's egos! Don't shoot me, its just that these two were so typically male.

Then again, it was because of that fact that made me love them both! They frustrated me no end,  but I just loved them to bits. Faults and all.

Posted by multitaskingmomma at 10:06 AM