eARC Review: A Matter of Mercy by Lynne Hugo 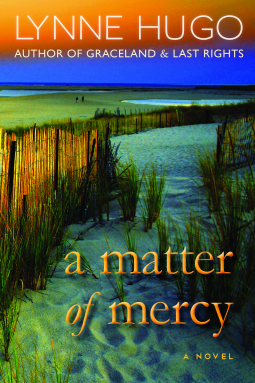 Caroline Marcum thought she'd escaped the great mistake of her life by leaving Wellfleet harbor, but is forced to face it when she returns, reluctantly, to care for her dying mother. Ridley Neal put his past--and his prison term--behind him to return home to take over his father's oyster and clam beds. Casual acquaintances long ago, when a nor'easter hits the coast, Rid and Caroline's lives intersect again. When Rid and two other sea farmers are sued by the wealthy owners of vacation homes who want to shut them down, and Caroline accidentally meets the person she most wronged, they each must learn to trust--and love.
Inspired by an actual 1996 lawsuit, A Matter of Mercy is a riveting novel about treasuring the traditional way of life in the shallows of beautiful Cape Cod bay by discovering where forgiveness ends. And where it begins.

There are those books whose imagery is so clear, you can breathe the same air the characters smell - A Matter of Mercy is one of those books. Lynne Hugo has managed to capture the world of Cape Cod in the pages of her latest novel, and it's one you'd be hard pressed to leave.

Most authors create perfect characters for their stories; not so here. Caroline is a scarred woman: out of jail for a DUI, reeling from a recent divorce, and in the last place she wants to be, waiting for her beloved mother to die. While in her childhood home where she never truly felt at home, she meets an old acquaintance when he works his grant in the shore right in front.

Ridley is another imperfect character but, while he was a one-time junkie and car thief, he's served his time and made peace with himself. He's content to be making a living with the grant his father left him, and while it's a tough life, working with his hands gives him a sense of accomplishment he wouldn't get otherwise. Everything seems right, until events he would never have predicted knocks everything awry.

First, a nor'easter pushes them together in more ways than one. Then, Ridley has a case slapped on him for trespassing on private property, otherwise known as his grant, which is on land leased by them for two generations. In the middle of all that mess, someone starts stalking Caroline. Adding the problems they have in their relationship, or complete lack of one, depending on who you're talking to, it's an overflowing case of SHTF.

In all of this, there is a silver lining. Of course there's a happy ending (it's a novel, after all) but redemption is more in the resilience of a tough type of person. As Rid noted, making a living on the Bay is more in the blood than anywhere else. It's a lifestyle, not a choice, that keeps them there, fighting against nature and arrogant people who think they know better yet don't understand.