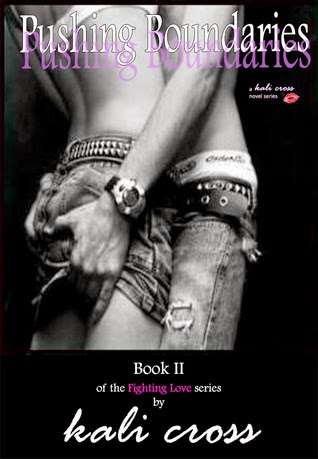 The exciting conclusion to Pushing Limits (Fighting Love Book 1)
New town? New life? Yeah, none of it was easy for Amber Turner, but meeting Tommy Bolt changed that. He healed the old wounds and made this callous, sarcastic girl believe in love again. Believe that she could be loved for something more than just a prop or a mirror image of someone else. That she could be seen, really seen, and loved despite her flaws. But one stupid mistake and one huge misunderstanding left her heart broken into tiny shards of glass. After weeks of waiting to hear from Tommy, she texts Tommy asking him to let her explain.
She got nothing. Crickets. Nada.
Not one text or even a simple phone call telling her they were done. Who does that?
After weeks of moping, her friends try to lift her spirits and help her to move on, but she still struggles with the memory of him. That boyish smile complete with dimples that come out to play, his hard body, the way he could make her body sing, and his sparkling sapphire eyes. Nothing about Tommy is easily forgotten. Amber is confronted with new choices as some old secrets come back to haunt her, threatening to destroy everything she ever believed about herself.

Somehow, Pushing Boundaries, while answering questions, doesn't really seem like the end to the Fighting Love series. To me, Kali Cross has lots of fodder for a few more books or a spin-off or two!

Amber and Tommy have their happily ever after - no surprise. But, along that happy journey, a few surprises crop up. Thankfully, they're nothing that could destroy the relationship but do a lot toward making them stronger. Tommy is finally able to trust Amber more, she's more willing to let him take a stronger lead, and she takes more steps forward to growing up.

Tommy's parents are a dream; finally Amber gets to see exactly what a family should be like. She now has a terrific support system to get her beyond that scared, hurt place she is hiding behind. Though, there are times when they seem to be a little more perfect than true. Somehow they don't do a thing wrong - even when they seem to be in the wrong, there's an explanation that makes them right!

Their relationship is maturing, too. Tommy shows more of his dom personality and slowly introduces Amber to the lifestyle, which she discovers she can get into.  And she never loses her quirkily unique, strong streak, which I liked a lot. Submissive never meant doormat to me.

But while the main characters' lives get nicely wrapped up, the secondaries have trouble brewing on the horizon. Sally is bouncing from one problem to another, Karen and Jerrod are seeing trouble in paradise, and Max is coming home. Even Aunt Patty and Professor Stewart have a big something-something going on.  With all of those strings left untied, is this really the end to Fighting Love?