eARC Review: Something About Jayden by Rawiya 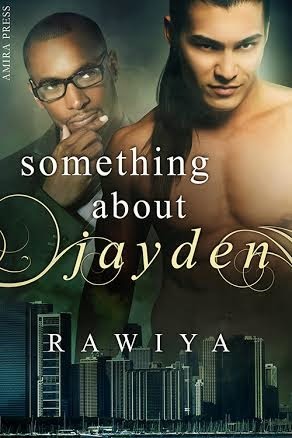 Isaac Bridges, closeted account executive for Denton & Associates is waiting to take over the company from CEO Silas Denton Senior after he forced Isaac’s father to sign the company over while on his deathbed. Standing in the way is Silas Junior and upstart intern Jayden DeMario. Jayden’s beauty, intelligence, and commitment to excellence has wowed Isaac so much that Isaac changed his mind about the importance of vengeance for his dad into the vow to win Jayden’s heart. Will Isaac’s decision backfire, leaving him lonely and thus destroying his career?

Something About Jayden is a romantic novel that is a mixture between fairy tale and real life. Jayden is an awkward account intern to Denton & Associates who lands the internship of his dreams. He is intelligent, mild mannered, beautiful and driven. His is a physique the grabs the attention of both men and women alike. His is a mind that grabs the attention of Advertisers around.

He is the man that grabs at the heart of one Isaac Bridges, Jayden's boss.

Isaac has had a plan two decades in the works. He has a marriage of convenience with his best friend but never lover. They both had plans and time was at hand when both are about to get their wishes come true. When Isaac lays eyes on Jayden, there is something about this young man that makes him want to throw caution to the wind and just live his life out of the closet and have the lover and partner of his dreams. But he needs to get his hands on Denton & Associates first... he needs to get his priorities straight: be CEO to the company he was robbed of. What he never counted on were Jayden's personal plans and  priorities.

This was a light read that never went over the top. The story calmly develops and there is none of the insta-love and tangle in the sheets brouhaha either. This is a story of the romance that develops between two men within the work place. They could have crossed the lines, but they never did. They could have had a torrid love affair, but it never happened. What happened was two men who began to work together with attraction brewing between them, but it never overboiled. These were two intelligent men with their own priorities and heads squarely placed on their shouleders.

Isaac, at times, was a selfish individual. He was not likeable when at that state. I don't blame him for being so, though, he had been closeted so he could work with a CEO who not only duped him of his inheritance but was also a known homophobe. Even if said homophobe's son was gay and out himself. Isaac had been simmering and almost over the edge for the past twenty years. When he finally gets close to his dreams and Jayden walks in his line of sight, he wanted to have his cake and eat it too. Gorge on it, truth be told.

Jayden was shy but he was just someone whose real personality never really got to be exhibited fully for his situation was dire. He was not rich, he had to care for an aging foster mother and he had bills to pay. His focus was on his career. The last thing he needed was the complication of having an affair with a boss who was closeted.

At times I would have loved to slap one of the other for their actions and decisions were placing me over the edge. I am glad their story never stepped over the romance lines for it made me appreciate how both Isaac and Jayde openly communicate with each other and together make the right and logical solutions. Especially on the issues they will surely face should their affair be discovered.

This is a feel-good novel that pushed all the right buttons for me. Just right for an afternoon read.