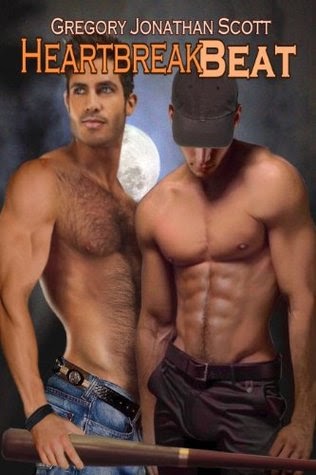 Love at first site grips two hearts, locks two souls and instantly connects them seamlessly.
Fast love begins on the diamond field where Gabriel unexpectedly encounters the man he’s only heard about. During a brief musical performance that starts his game, he quickly grows more aware of the lead singer with electrifying blue eyes, a striking smile and a body fit for more than just dancing to the thump of a distant drumbeat. Instantly he senses a link with the man behind the music unlike any he’s ever felt before.
By force of nature and during his song, Alec James is stimulated by palpitations of the heart when the center man of the baseball field looks his way and smiles. He falls in love with the pitcher even before their hearts have a chance to trade places. A song and a game executes a rock solid love affair between these two men who meet one another by chance.
Though building their life of love together, Gabriel and AJ merge with obstacles that cartwheel in and out of their path, and their romance becomes tangled with criminal suspense. While balancing newfound love and their iconic careers, they clash with distractions that spiral around them, one speeding up right after the other. In the course of it all, Gabriel and AJ refuse to give up on love and unprecedented male bonding.

A finale so unexpected breaks open when another spiraling event takes a shocking turn.

All the while I was reading this, at least the first part of this story, I was just so happy. I could not believe I fell for this and yet I found myself giggling at all the corniest, sappiest, cheeziest and super morantic words these two men, Gabe and AJ, exchanged with each other. I should hate this but no, I just loved this instead. Then things went from sappy to mysterious and then violent. This was a turn of events completely unexpected and made me refuse to drop this read.

There are two parts to the story here: the first part, as I already stated, is the sappy part. This is the part when the two men's eyes meet across the diamond field and just fell into each other's lives. Just like that, SNAP!, they fell and they fell hard. They were at that stage when they were oblivious to all else except for the taste of new love and maybe this is why they missed out on a whole lot of clues left so visibly in their path. When they were both blind to everything else but the love blooming between them.

The second part is when all hell breaks loose. When suddenly they are thrust into the public world, outed by someone close and personal and they know not who it is who betrayed them. Although the betrayal ricocheted to benefit both Gabe and AJ, this only escalated the violence that were targeting their very lives. And those around them.

Gabe and AJ are a power couple, in celebrity terms. Gabe is an all-star pitcher for a winning baseball team and AJ is the lead singer of a band (maybe a boy band) which hits are currently in the top charts. Both men are young and successful. They do not have the invincibility complex, however, neither do both dally with drugs. They party a lot, they drink a lot, but its all for fun and both careers demand each take care of their bodies so they are sexy abs and all. What makes their story go from cheesy to fatal at the turn of the page is not because of their doing. They have a stalker who is rubbing shoulder to shoulder with both men and it is difficult to pin who it is exactly. When bodies start dropping, it is only then that both men and those around them start fortifying their defences. But how can they lock their doors from their enemies when the enemy is within and among them?

This was such a fun read and even if I am known to absolutely hate cheesy and uber anything, I just found
myself giggling and laughing and then holding my breath on every single page. My face muscles are crazy painful for all the smiling and I could not resist the rating I gave. I admit, it is not the most awesome book I have read, but seriously, this book just was impossible to resist! I love it the way it is and of course, I fell for AJ and Gabe. So yes, definitely a must read!