eARC Review: Nihal of the Land of the Wind (Chronicles of the Overworld, 1) by Licia Troisi 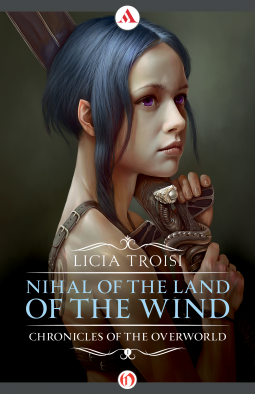 Nihal of the Land of the Wind (Chronicles of the Overworld, 1)
by Licia Troisi
Open Road Integrated Media  May 27, 2014
Amazon

An international bestseller from an extraordinary storyteller—get ready for Nihal and her world
Nihal lives in one of the many towers of the Land of the Wind. There is nobody like her in the Overworld: big violet eyes, pointed ears, and blue hair. She is an expert in swordplay and the leader of a handful of friends that includes Sennar the wizard. She has no parents; brought up by an armorer and a sorceress, Nihal seems to be from nowhere.
Things suddenly change when the Tyrant takes charge. Nihal finds herself forced to take action when she is faced with the most difficult mission a girl her age could imagine.
Fierce, strong, and armed with her black crystal sword, Nihal sets out to become a real warrior. Readers will be riveted as she forges her powerful path of resistance.

I was really excited to read about Nihal. After all, a book about a girl that's described as an elf, dragons, righteous battles, magic - it's just full of stuff I like to lose myself in. It started out really strong: the first chapter is beautifully described and the terrors that Nihal and her friends caused throughout the village had me chuckling a time or two. But as the book wore on, I found I was looking for the end of each chapter and marking the start of the next one to read later - much later. Which is weird, for me. I devour books like this in a couple of hours and this particular one was taking me forever to slog through.

Don't know why but it made me remember Hana no Ko Lunlun, a Japanese anime series created in the eighties, translated in English as Lulu, The Flower Angel, an anime I watched as a child. There are differences, of course, but Lulu (sometimes translated as Lily) never fit in. She was boyish and frequently got into fights which caused a lot of trouble wherever she went. Like Nihal, she left her home at a young age to perfect her powers. The only time she felt normal was when she worked those powers. It's a common enough theme, but still...

Then there are also quite a few books that make their influences known, from the currently popular-again Lord of the Rings to the classic King Arthur and his knights' adventures. I won't name them all but a careful read-through will reveal certain threads of older fantasy classics. Let me just point out that this is a Young Adult novel and most of the target audience probably won't have read these dusty old books. But if this will get them interested enough to dig up the original classics, I'm all for it.

In all, I don't think I'd read this again or the rest of the series. Sennar is the only character I liked and believed in here but not enough to read another book by this author. Maybe.

Just a few last things: One, I'm reviewing an English translation from Italian. It's very possible there are a few things that were lost or just don't come out the same way from the original. Two, I know there are lots of other people that love her work and I also respect their views and opinions. Unfortunately, this author's work just didn't click with me.

Email ThisBlogThis!Share to TwitterShare to FacebookShare to Pinterest
Labels: ARC, ORIM, Sci-fi/Fantasy, YA