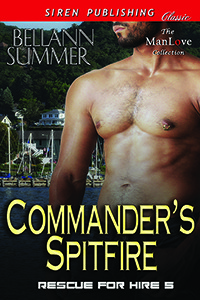 Welcome to the world of Rescue for Hire. Meet the team members that make up a company that form a family of heroes.
A rescue goes wrong bringing the boss’s brother Shane Miller into Tony’s life. As far as big, dominating, and possessive Shane is concerned, the gorgeous Italian is his. Now he just has to lead the team for his brother, fix all the family drama, and put the pieces of Tony’s heart back together.
Things finally get smoothed out, only to have his ex call, wanting Tony back. Tony’s decision could change lives and careers. Can the foundation Shane has laid for their relationship be strong enough to keep Tony? The dynamics between a hard-edged bad boy and a hot-tempered, vulnerable yet gorgeous computer nerd heat up the sheets.
A Siren Erotic Romance

For a year, computer expert, Tony Grayson was another man’s dirty little secret. After months of pain from a huge betrayal, he can finally breathe again and sees a glimmer of a future.

The fifth (and maybe last?) installment to the Rescue For Hire series by Bellann Summer is my favorite of the whole lot. This made me say 'awwwww shucks....' then made me sigh and then smile and just feel good all over.

This is Tony's story. That team member who was mentioned in every single installment. We knew his affair with Pip's brother was the hot and cold kind that was painful to read at times, especially when the rest of the team members and their partners would discuss his situation privately amongst themselves. I guess we all readers knew his was a sobstory and we all just wanted him to have his happily-ever-after like all the rest of the team. I guess it is just fitting that after all the other members have had their say, this series may just be ending with Tony and Shane.

Shane comes in as a surprise to everyone, but we all knew Cade had a brother. He retires from his government job and is revealed to be that commander Treble had respected (and maybe feared) way back when he was under Shane's team. Shane is the usual alpha type commander and was a typical male, but I loved that he had his own weakness to share.

Tony's and Shane's story is a simple one and quite follows the formula for this series. I don't know though, but somehow their story held more meaning for me. Maybe because their story also adds the needed closure to the questions left unanswered since this all began. We met Cade and Bret and yet we only saw the surface character of Cade. With this installment, all is left on the table and maybe it was simple, but still well done. So yes, this is my favorite of the lot and with that epilogue, I just got the goofy smile on. That goofy smile that never appeared throughout this series finally made its way on my face and... well, still smiling here.

Note: That train derailment situation was quite a scary situation and I had read and seen events like that on CNN and was left to wonder how the people and their animals made it through. Bellann Summer had stated this was a real experience she placed into text and maybe this made the story more real than just simple fiction for me.