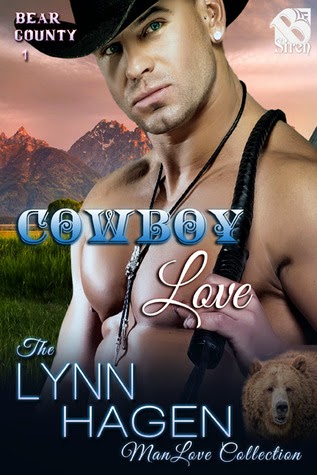 [Siren Publishing: The Lynn Hagen ManLove Collection: Erotic Alternative Paranormal Cowboy Romance, M/M, shape-shifters, sex toys, HEA]
After losing it all, Dresden is forced to move in with his uncle—a man who makes it very clear that he doesn't want Dresden and his son there in the first place. With a two-year-old son to take care of, Dresden is increasingly desperate to move out of the drug-infested trailer park his uncle resides in. When he finds out his uncle's dirty little secret, he must grab his son and run.
Being one of the partners of the Triple-B ranch and half owner of the Ugly Broad Saloon, Harland Macy tries to lead a simple life in Bear County. That is until he meets Dresden. What started out as simple fascination turns into a fantasy come to life. When he discovers that Dresden is not only his mate, but can conceive his child, Harland must find a way to stop Dresden's troublesome uncle from destroying the life Harland so desperately yearns for.


Lynn Hagen has given her fans another trip to the paranormal/fantasy world of shape-shifters living amongst humans. For those familiar with her work, she always manages to put in all the elements her followers and fans love and spins a tale that is both familiar and not. Cowboy Love is the first of the new series, Bear County and it has all of that which many fans like.

This is the story of Dresden, a mystery of a character whose background is not really totally revealed. Somehow he has a son via surrogate and is now out and down in the dumps and living with an uncle in Bear County and not loving it in the least. Not even liking it. He has no choice, however, and just grits his teeth and determined to make the most out of it until he gets his life straightened out. Then he meets cowboy Harland Macy. A bear of a man with a gentleness Dresden is attracted to.

Harland is a bear shifter, he and his friends are, and part owner of the Triple-B Ranch as well as the Ugly Broad Saloon. He is a respected member of the community, they all are, and is quite successful. When he lays scent on Dresden in a car service shop, he needs. However, his mechanic who just happens to be Dresden's uncle lays sight of the attraction, Harland is surprised at the animosity. He is patient, he wants Dresden and he will have him.

This is a plot followers of Lynn Hagen is familiar with. It is a simple tale of romance between human and shifter, and the drama is expected as well. There is mpreg here, or male pregnancy, so those who are unfamiliar are forewarned. Personally, I am a sucker of mpreg so yes, I just loved reading this book. But as a this is obviously the first of the series, there are a lot of things to establish and a lot of things left hanging. The most obvious action now is to await what is new and find out in the latter installments.