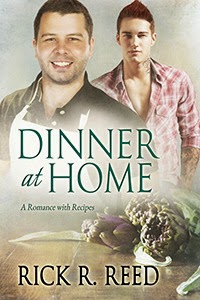 It only takes a few days for Ollie D'Angelo to lose his boyfriend, his job, and his home. Instead of mourning what he doesn’t have, Ollie celebrates what he does: the freedom to pursue his real passion—cooking. He begins Dinner at Home, a home-catering business, and it takes off.

Late one night, Ollie catches Hank Mellinger, a streetwise hood down on his luck, about to rob his car. Ollie soon discovers that appearances aren’t necessarily what they seem. Hank isn’t a criminal caught red-handed, but a hungry young man trying to make a life for himself and the four-year-old niece he’s trying desperately to take care of.
Instead of calling the cops, Ollie offers Hank a job and a way to pull himself up by his bootstraps. Together, they discover they can really cook... and that their shared passion for food just might lead to a passion for each other

Dinner At Home. A book with recipes. When I saw that teaser from the author, knowing his talent in the kitchen from all the mouthwatering pics he posts on his FB page and finally his recipe blog, I had no doubt this was one book I would love to read. Well, I did have fun reading this book: it was  such an adventure, getting caught in the midst of a voyeuristic adventure - what with all the orgasmic moans and groans.

Ollie sleeps and dreams food, he loves ingredients and just dreams of the ways he could create comfort home cooked meals. Meals his mother had lovingly taught him from an early age. Meals he learned from his nona's knees.

The saying "the way to a man's heart is through his stomach" is at the forefront of this story. Ollie is basically a loving, caring and nourishing kind of guy. His relationships, however, left much to be desired as was apparent when in one weekend, not only does he lose his partner of almost one year, but his job as well. Love and food don't seem to digest well with his romantic life, it seems, so he decides to just open a business doing something he loves: cater home cooked dinners for those who are in need and are just too tired.

Hank is an ex-con. He had not grown up in the best environment, his experimentation with drugs took him to low levels he is ashamed to face. Having a young niece dumped on him, losing his sister to jail and his mother to the Big C, he has nowhere to go, no way to feed either himself or his niece. Taking a chance on theft, he is caught by Ollie, but instead of getting cuffed and offed to jail, Ollie takes a chance, feeds Hank and eventually gains an unexpected family.

Ollie's and Hank's relationship developed fast but there was gratitude and trust between them. Their developing romance was just simmering on low heat until neither men could ignore the other. Their romance should have been happy, but life throws them curve balls and they need to learn to go with the flow or get burned in the process.

The way I read it, this is Reed's way of paying homage to two important women in his life, through the recipes they had learned from their own mothers and eventually handed over to him. The whole story is a love affair with food laced with the romance between two men. This much was evidenced by the level of eroticism over food  which surpasses the erotic scenes between the men. This is definitely a food lover's book with the added bonus of romance to spice it up. As an individual who practically lives in the kitchen myself, I have not only read a beautiful romance but I have found myself with a treasure horde of recipes.