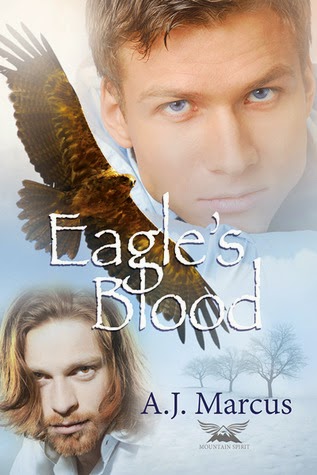 Mountain Spirit: Book One
Brock Summers is a Colorado Parks and Wildlife Officer with a heart of gold. When he discovers a video of golden eagles being shot and learns of a nest in trouble, not even a blizzard can stop him from trekking up the mountain in an attempt to rescue them.
When Brock returns with the one eaglet he manages to save, Landon Weir, the local wildlife rehabilitator, patches up the bird and the injury Brock suffered during the rescue. Though they have been friends and colleagues for years, their shared passion for protecting wildlife and the feeling of Brock’s body under his hands makes Landon see Brock differently. For the first time, Landon wonders if they can be more than friends.
To Landon’s surprise, Brock asks him out to dinner to thank him for his aid, but before they manage their first date, another video of eagles being killed surfaces. Neither man will let inclement weather, a dangerous mountain, or armed poachers stop them from rescuing the eagles—or each other.

There was something about Eagle's Blood by A.J. Marcus that struck me by surprise: it was such a solid and confident piece of visual read. Maybe it is because the author is a naturalist at heart, or maybe because he was writing about something he was passionate about, or maybe he just wrote something about a piece of his life and the words just kept flowing.

I have never read Mr. Marcus, I don't even know what he looks like, and yet through this one piece of work, I saw him in it. His passion for the survival of the endangered and the trampled upon animals around us was very obvious in this spirited work that not many would connect with: poaching.

In this first installment of the Mountain Spirit series, we see two men who had known each other for quite a while finally realizing that maybe they could have a relationship that did not just involve the injured critters they stumble upon and care for. We have Brock Summers, a Colorado Parks and Wildlife Officer, is a gentle giant of a man. He may be physically huge but his love for the animals he guards was just as huge. Then we have Landon Weir, a wildlife rehabilitator whose mental focus was mainly for the creatures brought to his care. Saying the attraction developing between the two men was slow on the onset is an understatement as when the book opens, it was established that these two had known each other for a long time. It was Landon's caring for Brock's mild injuries after rescuing an eaglet that sort of opened Landon's eyes and made him realize that he was no longer caring for a critter, but for a firm and solid man. Brock. Thing is, neither man could confirm the other was gay. As both were not 'out' in the open, they were hesitant to ask the other out on a date.

Well, Brock finally found his voice, and what do you know? That was the beginning of a beautiful romance.

Eagle's Blood is a highly visual book and there were times when the author went a bit further and made it auditory. His descriptive word of the wildlife and the territory the creatures claimed never stepped on the encyclopedic,  it was written from a very personal level. This is a type of writing I could relate to, the type of work I could honestly say I had no heart to put down for fear of missing out on a good scene. The romance factor was a bonus for me, with both Brock's and Landon's developing feelings for each other not made the main focus but just the icing on a beautifully baked cake.

This may be an MM story, but this was really a story about how each individual can have an impact on the environment, even the poachers. This is a story that makes us even more aware that despite all of the laws implemented, poachers will rise to the front and claim their right to kill and destroy for money. This is the story of the brave and determined few who are misunderstood for their love of the wild creatures. A highly visual read I could not put down.

Posted by multitaskingmomma at 8:54 PM