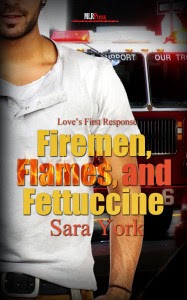 Grady Madison thinks his goofy clown suit is a huge turn off for the hot bear, Paul Sessa. But sometimes goofy is more appealing than suave.
When Grady Madison was forced out of the closet he thought his life would change for the worse, but he soon realizes he can date men without having to hide it from his co-workers. Attraction fires when he runs into Paul Sessa, filling him with fiery hot desire. Taking things slow is the plan, until they wind up with pants around their ankles before their first real date.
Paul Sessa wants a man of his own and not just another hookup. But that guy has to pass his daughter’s scrutiny, and she’s one smart cookie.

Here is another sweet short romance. This time, we have the second installment to the  Love's First Response series. This one opens to the story of Graham, that fireman who got gay-bashed by none other than his fellow officers and some of their idiot cop friends. Well, Graham has recovered, thankfully, and he has moved on with life. Then he meets a stranger by the name of Paul. Paul sees the clown-clad stranger and somehow, they connect. Even if Paul cannot see past the clown make-up and costume. It must be the eyes....

Paul is a chef, according to him he is not that attractive as he is not the stereotypical 6-8-12?-pack-abs-kind-of-guy. He sees a clown, gets drawn to the eyes, invites the clown to his restaurant and they connect for real this time. Best news: Graham seems to love the way he looks and states that his is the type he really loves.

The romance between Graham and Paul is like reading a book like one would watch a movie on fast-forward-mode which was a bummer..... Thing is, I really, really liked both men! arrrgh!!!!