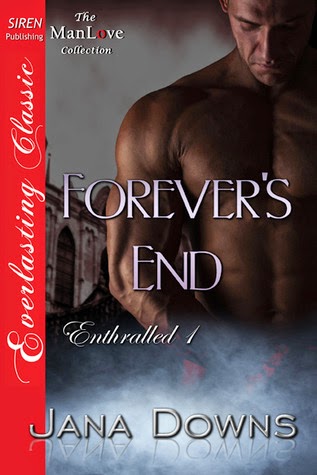 [Siren Everlasting Classic ManLove: Erotic Alternative Paranormal Romance, M/M, vampires, werewolves, HEA]
Ander Moore is a shifter who doesn’t belong in a world full of vampires, but desire keeps pulling him toward their king. Unluckily for him, the closer he gets to the deadly world of the royals, the more Ander struggles to keep his lust a secret.
The Blood King, Rowan Klaus, has ruled as the vampire king for centuries. He has loved and lost and sworn to never love again, a conviction that doesn’t come easy when he sees Ander. Determined to keep the shifter at arm's length, he never expects the Royal Gala to end with Ander in his bed.
Not everyone is pleased that a Silver Blood and the vampire king are engaged in a passionate tryst. Their growing affections lead them down a dangerous path where enemies circle closer and the burden of the crown becomes ever heavier. Happily ever after may come at a steeper price than either man is willing to pay to reach Forever’s End.

This is the first of the Enthralled series and knowing Jana Downs, she is going to come up with a different set of stories to accommodate all four kings of this world with four moons. Yes, you got that right. This is not an Earthly story, it is actually a different world with different gods or maybe goddesses and the way I understand it, this is a world where there are only men and the men can give birth. So yeah, this is mpreg but that bit of element is not up front and in your face.

This installment is about Blood King Rowan Klaus, a vampire immortal royal whose rise to power was set in a backdrop of misery and despair. Not only did he become a king during a war, but before the war, his parents were assassinated, his elder brother ended up doing something totally unexpected resulting to his exile and Rowan had lost the love of his life, Evan.

Then there is Ander. He is a Silver Blood or a wolf shifter who had been granted scholarship to get educated and training as a royal guard by the royals themselves. No one really understands how this all came about but here he is, a royal guard and within the sights of the King himself.

On a night when the king is supposed to choose his thrall so he could beget royal heirs, Rowan astounds everyone by choosing Ander. This begins the royal love story shifter/vampire style.

This is pure entertainment and again, I must confess, fed my guilty pleasure for mpreg and shape shifter/vampire stories. Will definitely follow this series as they come out and hopefully, crossed fingers! more details surface in the succeeding books to give light to what were left unanswered in this one.

Posted by multitaskingmomma at 5:13 AM