Review: His Touch of Ice by Kody Boye 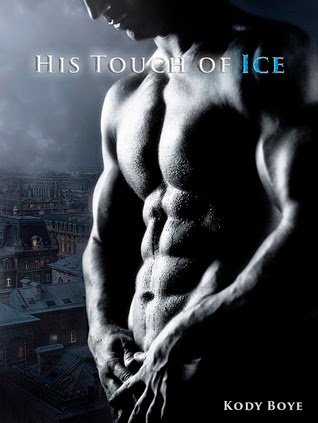 
After being kicked out of college due to false claims of plagiarism, Jason's life has taken a turn for the worse. Swamped with student loans and unable to pay rent, he is literally at his wit's end when he meets Guy Winters. Everything about Guy is fascinating: his lifestyle, his appearance, his generosity. So when Jason faces potential homelessness, he agrees to move in, but it isn't long before he realizes that Guy seems different. He's vague about where he works, the temperature is always freezing in his home, and his touch renders Jason breathless beyond what any passion should.
After a home invasion leaves a man dead, a horrifying truth comes to life. Guy isn't human, and another of his kind is in Austin, leaving trail of bodies in its wake that frames both men for murder. With Jason’s fingerprints in the apartment and a gunshot that will have sent the police department scrambling, there's no time to explain. The only thing they can do is run.

This is the first Kody Boye I have read and I must say I am not disappointed. The author has created a world that may seem like our normal one on the surface, but beneath and parallel it, things are not the norm. There is a paranormal world of shape shifters who live amongst humans as well as an alien one that has been with us for millenia.

The story begins and ends with Jason, a potentially brilliant writer just about to finish his graduate studies, when out of nowhere, he is accused of plagiarism - a bullish act that destroys his future and his pocket. Finding himself in the dumps, he just needs a release to forget his situation just for a few hours. This hunt for release sends him into the path of one Guy Winters, a handsome and intriguing man who captures Jason's attention. One night with the man was all it took to realize that this was someone not easily forgotten.

Just as Jason's financial situation turns for the worse, his savior is unexpectedly Guy. This confuses him, a lot, but does he have a choice to second guess a freely offered help? And he is given his own room and space, so, could he refuse? Of course not!

The story should have just flattened out from there, it should have led us to a humdrum paranormal romance, but author Kody Boye takes a 180 turn on his readers and leads them on an adventure into both the paranormal and alien (maybe extraterrestrial?). A world that is just getting to be known and understood, a world that Jason finds right, left, front and center of. This time, he has no choice. His future with Guy is now both loving and terrifying. Where this will lead them, they don't know.

There was something about how the author wrote this that made me just keep reading, and reading and not put it down. Ever heard of the words: curiouser and curiouser? This whole story just made me curious and wanting for more. The situation both Jason and Guy found themselves in were not very easy to comprehend so it was understandable that both men found themselves trapped in it. They had a means to a way out but they just kept bumping into walls they did not expect and from people they least expected. The alienness of Guy's world was a thing that Jason was just learning but he found himself going through it like one would read the first 100 pages of a 1000+ page book or even more.

The best thing I found from this read was the fast pace. There was no hesitance to how their situations changed on the turn of the page and this made it realistic, somehow. Everything in life is unexpected, there is nothing predictable for it can change on the tic of the tock, and Jason's future was clicking at a pace he could not begin to comprehend. When the book ends, it left me curious, disappointed, curiouser, and finally frantic for what comes next.

This was a great read and I just want more.

Posted by multitaskingmomma at 10:56 PM