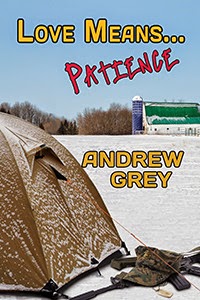 Years after his discharge from the Marines under “Don't Ask, Don't Tell,” Cody Culver lives in a PTSD-induced world all his own. On a mission, under misconceptions that Geoff and Eli are the enemy, Cody breaks into their farmhouse but is quickly brought back to his senses by a frying pan to the head. After receiving much needed help in the hospital, Cody has nowhere to go. Luckily, kindhearted Eli knows just where to turn.
When Eli asks former Marine Brick Hunter to help, Brick isn’t sure he wants to get involved. But Brick has worked through his own PTSD, and like it or not, he owes Eli a favor. With Cody struggling to rejoin the real world and Brick agreeing to take him in, they discover they have more in common than either of them thought possible.
Though Cody tries to stay in the here and now, he sometimes flashes to unexplainable traumatic events—events that don’t fit his usual war zone delusions. As the “delusions” grow more frequent, it becomes apparent they might not be delusions at all. Cody may have actually witnessed a murder.


One thing I love about Andrew Grey is his ability to come up with a simple, almost angst-free, romantic story within a setting that can be dramatic, and make that story come alive in our hearts and minds. He also has this talent for teaching me something new all the time. I had always wondered about the men and women summarily Court Martialed under the DADT and Love Means...Patience answers a few of those questions.

If there is one series I make sure to follow, it is the Farm Series. Not only does it have some of the most romantic stories I had read, but the life these men have in the farm can be quite the eye opener. It is not only that they actually work the farm, but they make the business work and make sure those around them work and succeed with them. Just like a farm community should.

When Cody, hungry, delusional and suffering from severe PTSD, breaks into Geoff's and Eli's kitchen, Adelle made sure he met the pan. Meeting the pan is not good for anybody, delusional or not, so he had to be hospitalized. Thanks to Eli's uncanny ability to spot a keeper, Cody finds himself within a community that not only are neighborly, but could honestly be the family he needed that will support him in many ways. To get him on the right track of help, Eli's gets neighbor Brick Hunter to help out.

Brick shares an almost parallel history with Cody. He was a marine who risked life, limb and sanity for the corps and DADT killed all hopes. Recognizing the same pattern of PTSD in himself and Cody, he agrees to help out. Hesitant because he was not medically qualified, he approaches Cody as only a marine could: as a Marine.

Time passes and Cody and Brick get to know each other, help each other out, and communicate their deepest fears. The relationship brewing was slow in the uptake but with very sure steps. It was in one of these talks that Brick realizes Cody had witnessed something that may not necessarily be imagined... and this is when their story takes a turn.

I cannot say enough that any Grey book is a sure one click for me. There is never a question of satisfaction from his stories, be they hilarious reads or the more intense mysteries. In this seventh installment to the Farm series, we get the same deep romantic fulfillment we always get, but with a difference: this is a little more intense than the others. But only in the best ways.

Another sure thing from a Grey book.

Posted by multitaskingmomma at 7:14 PM