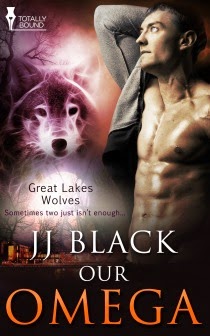 Sometimes two just isn’t enough.
Noah Steele is a broken man. Born a strong, confident Alpha, he’s now a shell of the man he once was. Tortured and betrayed, he no longer trusts his instincts or his ability to lead. Shamed, he hides himself away, even from the mate he longs to claim as his own.
Dax Marshall needs some down time. Between protecting the Pack in his role as Beta and leading teams to search for more of Alpha Steele’s facilities, his responsibilities are starting to overwhelm him. If only he could find the one person destined to soothe both himself and his wolf. A chance run-in with Noah Steele changes everything, giving him hope that his future won’t be as lonely as he’d feared.
Between dominant wolves, power struggles are always an issue. Time and patience will be needed to make their mating work. Unfortunately, time is in short supply. New information has Dax, Noah and a team following a lead. Instinct and a bit of luck lead them to a facility and much more. Among the prisoners, they find an abused young man who calls to them both in a way that neither of them understands.
While they scramble to adjust to fate’s curveball, more information comes to light showing just how far Alpha Steele is willing to go in his quest to rule the Packs. Will their new happiness withstand the madman’s plans or be destroyed by the malevolence of his ambition?
Reader Advisory: This book contains scenes of ménage, violence and reference to sexual abuse.


The ménage relationship between Noah, Dax and Landon surprisingly did not go the wham-bam-mine! path as I was expecting. Their relationship actually developed slowly and without sex. Yes! surprising isn't it?! There was none of the MINE!!! hump-hump-bite-hump-hump that I have unfortunately been subjected to these days and this is what really makes me like this story enough to actually encourage readers to pick this particular series up.

Noah and Dax first have a go at their relationship but being two huge men and having the alpha-male psyche can pose some difficulties. The only thing that made them work was that Dax did not have the drive to rule or command or be leader. They had mild difficulties but overall, their learning curve was not that steep and they soon discover their third in the omega, Landon, whom they rescue.

When Landon comes into the picture, it was a bit strange, for lack of a better word. There was none of the instantaneous recognition of mates on Landon's end, although the two bigger men immediately recognized him as theirs. This part of their story was a bit vague but then their relationship develops through the course of a few days. There was not much focus on anything but Landon's recovery and that was important for he was damaged both physically and psychically as a shifter. His struggles with his wolf and his role as an Omega were overpowering at times and he was having a lot of difficulties. Unfortunately, their lives had to go on, they had to move on, for Alpha Steele, the nemesis of this series, was making more and more packs either landless or homeless and just dead. They needed to focus on this huge problem more than their sex lives and mating.

One thing I found lacking here are the details about what an Omega really is - at least for this tale. Although the bits of hints and such written here were enough to give the much needed information, I felt that the story ended with a lot of things hanging regarding this particular point. I would want more information regarding offsprings for one but I cannot spoil the details without spoiling a lot of the storyline.

Overall, this was an unrushed story for the most part and typical of the series, this ends just where things got interesting and the next installment will most probably open where this one left off. Will make sure to follow this series as it is getting interesting now. I just wish I had more in my hands information-wise but then again, I think that was purposefully done by the author.... and I am a sucker for books that keep me curious.

Posted by multitaskingmomma at 9:16 PM