Review: The Protector by Cooper West 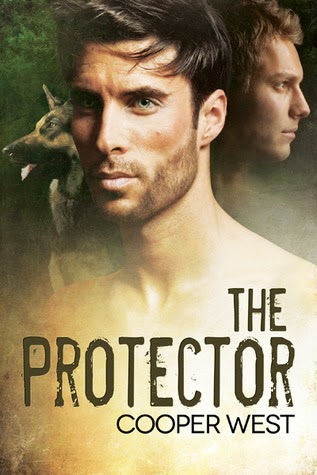 Guardsmen are always matched in a bonded pair. The Protector can shift into a weredog, and the human partner is his Handler. They are incredibly rare and highly valued, but people also fear them for their mystical abilities. No Protector in living memory has outlived his Handler—until Alex Taylor.
Now a widower, Alex lives a lonely half-life and faces day after day of grief with no hope for happiness in the future. When he unexpectedly bonds with the young and vibrant Handler Marcus Stephanek, Alex is angry and unwilling to leave the memory of his former Handler behind. He pushes Marcus away and tries to distance himself from their bond. But then a mysterious villain who has been secretly shadowing Alex for years sets his plan in motion. Alex and Marcus must learn to trust their bond and love each other, or risk not only their own lives but the lives of those closest to them.


For some reason? I really, really loved this story!

Sure, there were times I found myself sitting up and just wanting to bitch slap Alex and Marcus separately. There were times I just wanted to bump their heads together to get them to see the light! Boy, these men put to shame the word: stubborn!


The setting is the alternate Earth, where the norm was both humans and werewolves lived side by side. Their history mimicked what we have, but the twists were the weres. But they were not weres, not really. They were Protectors. A breed of humans who could shift to German Shepherds and be there to help humanity and civilization flourish. Beside them were their partners, their Handlers. These were another breed of humans whose only purpose was to be coupled with the shifters and be their translators. Their protectors. Their lovers. Their mates.

Just like any civilization, there were those who opposed the norms and so these people met each challenge thrown their way backed with the training they receive. To become a full fledged Handler and Protector, they needed to meet their mates. There were times they never did, and so bitterness and sometimes misery are lead their lives. There were also times when the Protector loses their Handler to death. As the bond never severs, death is expected.

Alex was a Protector and he lived for his lover and husband, Theo. Then Theo gets killed. Wishing for death, he and the rest of the world are surprised when he lingered and lived as a shadow of his former self.

Until he meets Handler Marcus.

Marcus was what we would call "over the hill," he was beyond the age of bonding and, bitterly, he realized that maybe he was not meant to have a bond mate. He had driven himself to be the best academically and now taught the youngsters all he knew. He was the best at what he did. But he was Partnerless. With all his studies and training, he knew all there was to know about Alex. The least he expected was to bond with that particular Protector.

These two men were so stubborn it was miserable reading through their misery of not accepting one and the other. Alex could not let go of Theo, and Marcus could not compete with said ghost either. I wanted to sing so loud here! Let it GO!!!!!! It was misery! Truly.

But somehow, I could not put the book down.

I wanted to know what would happen to them, especially when unexpected events started unfolding and mysterious developments started happening. As the men get stumped by all these surprises, I as a reader was just as stumped. Author Cooper West managed to hook me good on this one and I just had to finish to find out what happens next.

Will there be a follow up to this??????? grrrrrrrrr