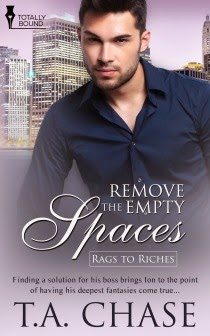 Remove the Empty Spaces (Rags to Riches #1)
by T.A. Chase


Finding a solution for his boss brings Ion to the point of having his deepest fantasies come true.

Being a mailroom clerk is a stepping stone for Ion Vasile. He doesn’t plan on working in the basement at Bellamy International forever. Ion spends a lot of his time fantasising about Adrien Bellamy, CEO and President of the company. He’s sure Adrien doesn’t know he exists.Adrien Bellamy does know Ion exists. Even with all his money and power, Adrien isn’t sure Ion would want to go out with him. So he keeps his distance from the gorgeous mail clerk.After Ion finds a solution to a troubling acquisitions, Adrien takes a chance and asks him out. Their attraction runs red-hot, and a serious relationship becomes a possibility. But first they have to deal with their families and the differences pointed out between them. Adrien must find a way to convince Ion his lack of money and name doesn’t mean anything because Adrien loves him no matter what. 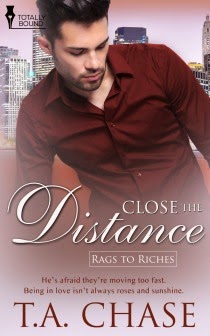 
Being in love isn’t always roses and sunshine.
Ion Vasile and Adrien Bellamy start dating and fall in love quickly. As their relationship grows stronger, Ion discovers the fragility of his family ties. As his mother turns against him and his brother seems to be supporting her, Ion begins to lean more and more on Adrien.
Adrien wants nothing more than to be strong for Ion and share his own family with him. Yet he’s afraid they’re moving too fast. He doesn’t want to scare the most marvellous man he’s ever met away.
When tragedy strikes, they both realise life is too short to let fear rule their choices.
Reader Advisory: This book is best read in sequence as part of a series. 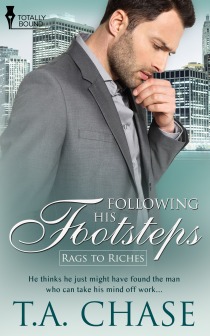 Following his Footsteps (Rags to Riches #3)
by T.A. Chase
Expected publication: May 30th 2014 by Totally Bound (available for early download)

Being just like his father is what scares Winston the most.Winston Tennant came to New York to work. After burying himself in his job for the several years, he’s afraid he’s becoming like his father. Cold and indifferent, Winston’s father only wanted his son as a way to continue the family line. When Winston came out, he was disowned. His best friends do their best to keep him from his father’s fate. And when Winston meets Patrick Gaverson, he thinks he just might have found the man who can take his mind off his work.Patrick Gaverson never imagined that Winston Tennant, head of the London office of Bellamy International, would be interested in a mere personal assistant like him. Yet after a not so subtle set-up by his boss and his best friend, Patrick finds himself on a date with Winston. He discovers that Winston is a lot more down to earth than Patrick thought.Falling in love so quickly shouldn’t be easy, but Patrick’s willing to take a chance that it will last more than a week.

I am so excited about this series written by author T.A. Chase. I just stumbled on this by accident and I actually started with Following His Footsteps because a friend mentioned loving it but when I started reading about Winston's best friends and their impending marriage, I just had to stop and get my hands on the first two books. This way, I thought, I could enjoy it all the more.

Boy, did I enjoy these three books!

A word of warning though: this series is far from over. Although I have read these three books, the story of the third best friend, Sidney Richardson, has not been told yet so we have to wait it out a bit longer. Needless to say, I am really looking forward for what's next to come with this series.

The first installment, Remove The Empty Spaces, should not really be read without going on to the second installment, Close The Distance, immediately. These are a continuing story between Adrien Bellamy and Ion Vasile and if it is just the first book read, there is a huge hanging thingy going on that can be frustrating. The need to read book two is a must. Fortunately, although their story does continue onto book three, Following His Footsteps, they are now just side characters. The main focus of that particular installment is on Winston Tennant and Patrick Gaverson. Both men are in the first two installments so they are not really curious insertions. In fact, Patrick plays quite a huge role on Adrien's and Ion's relationship.

The first two books, as I already mentioned, tells how Adrien finally found the impetus to ask Ion out. Ion had been working in the main office's mail room and been seen by the boss from afar, seen and admired, but given their roles in the office, they hardly saw each other. It was one bright day when Adrien loses his cool over the lack of solution regarding the employment of thousands, that Ion finds his opportunity to strike.

Ion is on his last semester before he finally gets his MBA degree and is really a brilliant young man. The thousands at stake involved his own family and so he knew he needed to do something that would save them their jobs. Well, he did. Only problem is, how to get said solution into the hands of the boss man himself. This is where Patrick comes in.

Patrick is the Personal Assistant to said boss and so had all the means to get those files on the table. He did it. The board read. The solution was simple and implementable. Now to find the brilliant mind who thought it up.

That, as they say, is when the story of Ion and Adrien really began. When two brilliant minds meet, they can either clash or merge. In this case, the minds merged. Along with their bodies and their hearts.

This is a real fairy tale romance - just look at the series title. As fairy tales go, there can be times when things get dark, sometimes it could get adventurous, and then it could go oh so romantic and cheesy. Then again, that is what I am looking for in a fairy tale and this series did not disappoint.

As the drama unfolds in the life of both Ion and Adrien, so does the drama in the life of Patrick unfold. In comes, finally, a man Patrick could hold on to and give up his heart for. Winston Tennant did not have a good life while growing up. Yes, there were a lot of silver and golden spoons, but emotionally, he was a starved little boy who just wanted to feel some bit of encouragement from his parents, one that did not involve bloodlines and social status. When he came out to his parents after deciding to divorce his wife, he was disowned. Thanks to his best friend and that friend's father, Winston found his feet within the Bellamy empire and soon rose through the rank and file and is now heading the European division. Unfortunately, being in that position did not make his personal life any happier. It was just as bad as when he first came out. Again, the one that connects the stories is Patrick.

Patrick had had a crush on Winston since he first met him five years ago. Unfortunately, the man was straighter as straight and so shrugged it off as fate. When Winston turns his focus on Patrick after being solidly punched with a not-too-subtle setup by Adrien and company, Patrick decides to live life a little and just enjoy. Never did both men expect their relationship would go the path it did. But they worked it out and so begins, and ends the third book.

This was a very light and incredibly enjoyable, fast read and cannot recommend this enough.

But here I am, impatiently awaiting the fourth installment. I don't think I can stand the wait, frankly, so will just have to stalk this author more, I guess. I really need that fourth installment, I need to know what happens next between Patrick and Winston, and then of course, Sidney.

Posted by multitaskingmomma at 7:47 PM