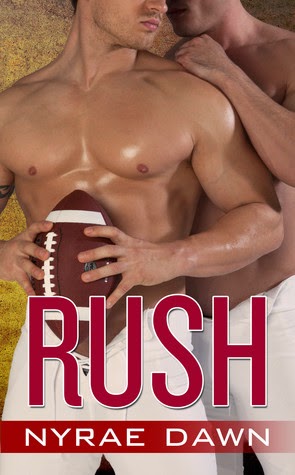 This new adult, male/male romance will capture the audience who fell in love with Nyrae Dawn's Games Trilogy.
For the love of the game.
Brandon Chase has always defined himself by one thing: football. Tough and athletic, he is a great college player who enjoys the hard hits and the sweaty grind of the gridiron. But when Brandon is injured, only one person can help him get back on track-a forbidden love he's desperately tried to put behind him.
Alec Andrews has never quite forgiven Brandon for walking away when their friendship turned into something more. But he can't deny help to one of his closest friends. As the two spend the long, hot summer working together, their old attraction comes flooding back.
Now as Alec thinks about coming out to his conservative family and Brandon considers revealing he's a gay football player, the two men must be strong to fight for a love that could be the greatest rush of their lives.
Approx. 70,000 words.


Oh my. This is a coming out story like I have not read before. Sure, there are a lot of angst, drama and self-recriminations going on coupled with angst, drama and personal faults, but this is one story that I find real in the sense that it gives us a glimpse of how difficult it is to face up truths, accept them and hope that others accept it just as well.

Two young men, since they were fifteen, had been in love with each other. It was not an instant love affair between two youths, no, they were friends and buddies first who soon realized their feelings for each other were not considered in their heterosexual world. They tried to fight it, they tried forgetting it, but love is love is love and there is no going against love. Just like the young men they were, they went through a whole lot of decision making just to make it through their budding relationship. They even went to the extent of breaking things off, but no one or nothing can fight against a relationship that was the forever kind.

Brandon is a football player, a very good one, then again, so is Alec. However, Brandon lived and breathed the game while Alec did not. It was the game that held Brandon back from truly facing his demons and Alec was just scared to be true to himself for fear of losing his family and Brandon. This was a relationship that was doomed from the start, almost like star crossed lovers. But the two boys fight it out, even when they had broken up. When Brandon gets injured and was seen by his brother as spiralling towards oblivion, it was only Alec's presence that gave him the boost out of the despair. This also triggers both young men's realization that they could no longer hide, that they needed each other.

The whole book reads of the decisions and indecision throughout and yet it did not frustrate, it did not even anger me to rush to the end and just cheat. This was a journey into the lives and minds of two men who will have to be who they are or not survive.

This was a beautifully written romance on life by Nyrae Dawn, quite timely too. My only regret is

not knowing what comes next for these two, for life is not easy after everything is said and done.