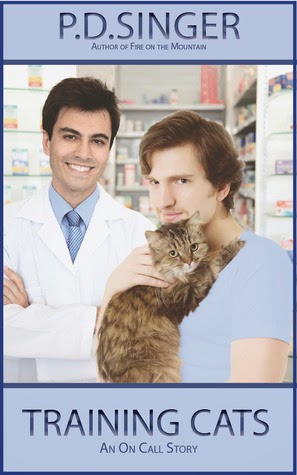 Close enough to touch, and still out of reach—Evan rings the PriceCo pharmacy register for Brent and keeps his thoughts about the pharmacist to himself. He dies a little inside every time he sees Brent with Tyler—why does Brent let that jerk treat him like dirt?
After one humiliation too many, Brent’s asking himself that same question. He has a better chance of teaching a cat to sit and stay than of convincing handsome, self-centered Tyler to be thoughtful. It’s time to be single again.
With the right bait, Evan can teach a cat to roll over or a man to see what’s before his eyes. He might need Kitty Noms, or a touch of kindness, a pinch of consideration, and a trail of M&Ms.

I was in the mood for a short read and landed with Training Cats. It had been in my TBR list since 2012, and I am just grrrrrr. Anyways, I have had this for a long time and I needed a short and I got a sweet short romance that was not what I expected at all.

This is the story of how Brent and Evan came to be a couple. It all begins with Brent having not-so-loving-thoughts about his lover Tyler. It seems that this discontent is not really so much because of the lack of loving, or the lack of appreciation per se, but simply the lack of ANYTHING! Tyler is the stereo-typical a$$ and is just as self-centered and selfish as could be. Worse is, he thinks he's lovable and funny. NOT!

Evan works in PriceCo where Brent and Tyler shop most times for basically everything they need. For quite some time, Evan had been looking at Brent with want and need but the Tyler Factor is putting a damper on everything. What really gets him is the way Tyler treats Brent and apparently Brent is blind to it.

Well meaning friends who know better finally make certain to get Brent to see and listen rather than just to look and hear. It made a lot of difference and it opened Brent's eyes for once and the epiphany is not only ludicrous, it is ridiculous. So out the door goes the Tyler dude and now all Brent has to do is move on. He's getting a cat.

The cat is the factor that makes Brent's and Evan's possibility actually happen. Evan knows how to train cats and, for those not in the know, treating your possible or present partner as your cat (or dog) is the best way to get them to not only love you, but love you unconditionally.

And so the tale of Brent and Evan The Couple begins. This was a lovely short and it was well written. Probably the only thing I am disappointed in is that - well, it ended.