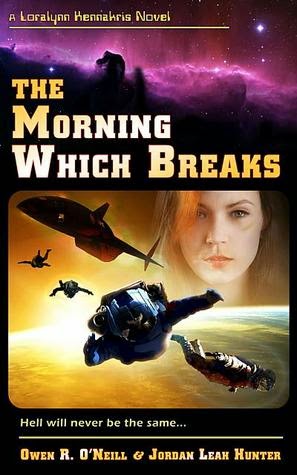 It was supposed to be the beginning of a new life—not a replay of her old one . . .
For eight years, Kris was the property of a brutal slaver captain. Now she's free and a brand-new cadet at the Nereidian League's military academy. All she brings to this new life is a unique set of skills, a profound ignorance of 'civilized' society, and a large chip on her shoulder.
But Kris isn't quite sure what to make of the Academy, and the Academy isn't at all sure what to make of her. The medical staff thinks she's homicidal, her fellow cadets think she's crazy, and her instructors don't know what to think.
So when she's approached about helping capture a terrorist warlord, she's more than happy to leave the halls of academia behind for awhile. Kris knows she's not signing up for some pleasant holiday. What she doesn't know is that the key to the mission's success is reliving her very worst nightmare . . .
The Morning Which Breaks includes an extensive glossary that defines terms, describes technology and organizations, and provides additional background material for the Loralynn Kennakris series. Comprised of over 300 entries, the glossary is fully indexed and cross-linked to give you easy access to the information you want. An indexed biographical list of characters is incorporated as well.
Authors' Note: This book pertains in part to sexual slavery and the effect it has on those rescued from it. It deals with both physical and physiological trauma. Although fiction, this is serious matter and may disturb some readers. It is not 'young adult' fiction, and we do not consider it appropriate for younger readers.


Loralynn Kennakris' story continues right after agreeing to train as a pilot in the The Morning Which Breaks, Jordan Leah Hunter and Owen R. O'Neill's gripping account of a young girl who'd had a bad start in life and has been given a chance to prove her worth to the entire universe.

Kris finally makes it to the Academy, ready to fulfill her dream of flying and taking revenge on the slavers that abused her for eight long years. As soon as she arrives, she realizes there is something wrong. Her classmates are alternately in awe and afraid of her and her instructors have a hard time accepting and understanding her gifts. It's tough to fit in where you're so obviously set apart. Now what sets her apart, you need to read the book to find out.

After unforeseen events, Huron asks for Kris' help yet again. They're off to another planet to stalk and capture another high-ranking slaver who's quickly gaining power through terrorist means. As his plans slowly reveal themselves, it becomes obvious to Kris and Huron that the only way they can get a bead on him is for Kris to risk her mental stability and relive all the terrors that she'd been through.

Kris visibly grows up. While she was forcibly matured in The Alecto Initiative, there is still a trace remaining of childlike behavior and it slowly falls away with what she has to face chasing Nestor Mankho. There's now more to her life than killing; conversely, it takes death for her to realize that her life is worth something and she has something to live for.

Of all characters, Huron has always been my favorite. To me, he's the quintessential officer and gentleman, the reluctant hero, the brilliant soldier and strategist. Now a Commander, his duties have become more important and it's vital that he succeed. Since his partnership with Kris worked so well before, why not have a repeat? After all, there is no one better informed of slaver ins and outs than this woman. It's also becoming harder for him to hide his growing admiration, although everyone else seems to see it - except Kris!

The returning characters, especially Trin and Nick, are more rounded. Trin's razor sharp observations are clearer and Nick is a wonderful man who just loves to thumb his nose at society in general. These two as a team or as a couple could very well take over several worlds if they'd want to. Huron's father and brothers are no longer shadowy and far away. I'm pretty sure they're going to be more prominent in the next book. And no new character is more interesting than Mariwen's brother, Antoine. He's definitely someone I'm going to be keeping an eye on. Then there is Mariwen herself. Something mysterious is going on, which I think will be explained soon?

The science involved is so intriguing, it's another character all by itself. I never found it intrusive or overwhelming. It's integrated in such a way that it doesn't overshadow nor distract from the main story. There are other books where the science parts numb your mind but thankfully there's none of that here. What you get is pure information that is just as important as the rest of the story. This is where it's an improvement on Alecto.

This sequel is one of the few books that is better than the original. While Alecto was infinitely

interesting, The Morning Which Breaks sucks you in and refuses to let go. From Kris' whirlwind days at the Academy, to chasing terrorists, to heart-stopping lessons for honing military skills, it's hard to find time to breathe! It captures your imagination with its strong auditory feel (I could hear grenades exploding behind me) and its attention-grabbing visuals (can you imagine a barren planet populated by mobile carnivorous plants that SING?), making this a book you must read to believe!

***I was lucky enough to be asked to beta read this book.