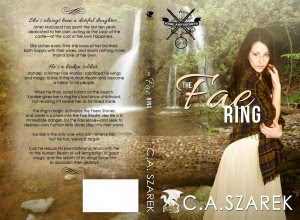 C.A. is originally from Ohio, but got to Texas as soon as she could. She is married and has a bachelor's degree in Criminal Justice.
She works with kids when she’s not writing.
She’s always wanted to be a writer and is overjoyed to share her stories with the world.
C.A. Szarek is also author of Collision Force, Chance Collision, Sword's Call, Love's Call and The Tartan MP3 Player. 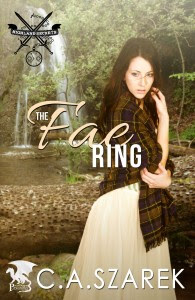 She’s always been a dutiful daughter…
Janet MacLeod has spent the last ten years dedicated to her clan, acting as the Lady of the castle—at the cost of her own happiness.
She aches every time she looks at her brothers, both happy with their wives, and wants nothing more than a love of her own.
He’s a broken soldier…
Xander, a former Fae Warrior, sacrificed his wings and magic to live in the Human Realm and became a traitor to his people.
When he finds Janet forlorn on the beach, Xander gives her a ring he’s had since childhood, not realizing it’ll reveal her as his fated mate.
The ring’s magic activates the Faery Stones, and Janet is sucked into the Fae Realm. Her life is in immediate danger, for the Fae sense—and seek to destroy—any human who dares step into their world.
Xander is the only one who can retrieve her, but he too, wears a target.
Can he rescue his soul-mate and return with her to the Human Realm or will temptation of great magic and the rebirth of his wings force him to abandon their destiny?

Review
My Rating: 4 Out of 5 Stars

After Clair traveled through the Faery Stones and helped Duncan rescue Alex and Alana, new adventure comes to the MacLeods, centered on the only sister, Janet.  A new member of the family is dragged into the adventure, too: Alana's Fae cousin Xander.

Janet has fascinated me since The Tartan MP3 Player, where she is the only one who spoke to Claire in a modern way. I often wondered why - had she gone through time before as well? - and hoped it would be answered here. But then she is mated to Xander and all things go awry so there is no time for any of that. This is one character who is strong, determined, and focused: a perfect match for a Fae warrior.

Xander, with his forbidding demeanor and gigantic stature, would scare anybody silly. From the start, when he protects Alana while Duncan steals both her and his twin Alex away from the Fae King's castle, Xander is portrayed as a formidable opponent, one who would risk everything to ensure the safety of the ones he loves. It is even to his own detriment when he follows them into the human realm and seals his own fate as he knows he will be labeled as a traitor and sentenced to instant death. That very trait comes into play when he puts his ring on Janet simply to amuse her and make her feel better. That protectiveness doubled when it's revealed that they are fated and she magically disappears back into the land of the Fae. Of course he'll rescue her, there is no argument about that.

The world that the Fae love so much seems rather garish to me, though what they consider dull and colorless is our usual natural beauty, which makes all things just about equal. Then there are the magical powers that are ubiquitous in their world, ones that would be downright scary if they occurred here.

Hide-and-seek with the Fae army reveals exactly what type of character Xander is, which endears him all the more to Janet - and me! The rebel that was hidden under that calm demeanor finally appears and it's amazing to see how much he had hidden from everybody except Alana. Not even his former brethren expected powers like that!

There's just enough suspense to keep to keep your curiosity piqued until the adventure is over. Although I found Xander's reaction a little over the top, I sort of understand why the reaction was the way it was portrayed. And, I admire Janet so much more! She is one tough woman  who was able to surprise everyone with how fearless she truly is.

C.A. Szarek was able to weave in so much detail into The Fae Ring yet left several questions open for the next installment: Why IS Janet so modern? Is Clare able to see her sister again? And does the ring come into play again at the end of the story? I guess I'll have to read it to find out!