eARC Review: In Your Eyes (Mates #3) by Cardeno C. 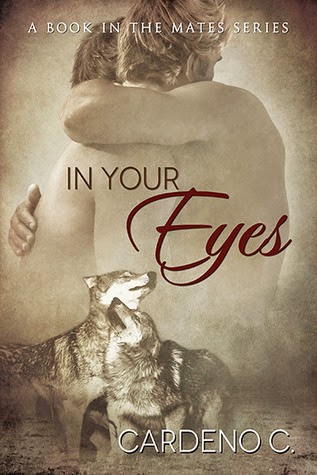 Raised to become Alpha of the Yafenack pack, Samuel Goodwin dedicates his life to studying shifter laws, strengthening his body, and learning from his father. Taking control comes easily to Samuel, but relating to people, including those he's supposed to lead, is a constant challenge.
When Samuel meets Korban Keller, the son of a neighboring pack’s Alpha, he reacts with emotion instead of intellect for the first time in his life. Resenting the other shifter for putting him off-balance, Samuel first tries to intimidate Korban and then tries to avoid him. What he can’t do is forget Korban’s warm eyes, easy smile, and happy personality.
When a battle between their fathers results in tragedy, Samuel and Korban are thrown together. With his world crashing down around him, Samuel must save his pack and show them he can lead. But first, Korban needs to save Samuel by inspiring him to feel. Two very different men with a tumultuous history must overcome challenges from all sides and see past the rules they’ve been taught to realize they are destined to fit together.

The first book of the Mates series was Wake Me Up Inside and it was a delicious romance between an alpha shifter and his childhood best friend. The second, Until Forever Comes, was about a wolf shifter and a vampire. This third one is about two young alpha-in-waiting who come from different, neighboring and, for all intents and purposes, friendly packs. These three stories have one thing in common: the important information regarding same sex mating was never mentioned in the annals of their oral and written history. Imagine their confusion when they meet their true mates in the form of men. There is confusion, there is misinformation, there is trouble at every turn. If we add in the element of un/misinformed alphas and pack members? tsk tsk

This third installment is the book I had been waiting for since I read that second book. There were details there vaguely touched and had remained a mystery. Until now. Answers are finally revealed through the mind of Samuel Goodwin, one of the young alpha-in-waiting. His is a brilliant mind and he learned all things written from books and unwritten from his beloved father, the current alpha. Although he is physically strong, his mind is really his main strength, and as the story progresses, it is soon apparent why he may have to rely on this mind rather than his brute strength.

The other young alpha male is Korban Keller. He also comes from a long line of alphas but their reputation was not that good. This is the same pack that abuse and shun member shifters they deemed different, and gets into trouble with other packs when members decide to relocate. Korban is different, though. He had recognized his true mate in the young Samuel way back when they were children and although it is this realization that would later prove to be his strength, many also considered this a weakness and could prevent his taking up the alpha role.

So what do two young, strong, alpha males do when they end up as true mates? Other than the usual angst of being the same sex and the expected pack rivalry, they both have to deal with a tragedy that strikes them at the most unexpected time. This was a heartbreaking event that changes the course of how each young man would live their lives and how they see their future roles as alphas of their respective packs.

There is a saying: "from the ashes of tragedy rises the true strength of the alpha." In this case, two alphas. Each man must deal with their tragedy, their mating, and the politics within the shifter world. Who will win out in the end?

Those who had read my Review for the second book know I did not like it in the least for it was too erotic and angsty and I felt that the plot suffered from it and prevented said plot from moving forward. Then again, that was my opinion then and I trusted the author. How happy was I when she comes up with a gem of a third book that not only surprised me with the turn of events, but detailed the much needed information, getting this story arc beyond that of the usual MM shifter romance? Let's just say: I jumped up and down and threw a fist pump. Totally unexpected, beautifully executed.

This book is a beautiful balance of heartbreak, romance, eroticism, political intrigue, action and mystery. The story developed so well it did not drag once. It was lightly written (despite the events unfolding), making this a fast read. It's action packed scenes were not limited to the shifter battles and fights but instead extended deeper into shifter politics. Twists into the plot turned this unpredictable and very intriguing making it a harder read to put down for then it would mean having to disturb the flow of the story and the time to get to that end. So yes, I read this in one sitting.

A one hundred percent improvement from the second installment, this is definitely a must read. For those who have not read the first two books, it should really not be a problem, but it would mean missing out on a great series.


Note: The Mates is one shifter romance  series  where all three books can each be read as a standalone. Each one has its own story but the plots intertwine and there are mentions of characters who had already appeared previously.

Posted by multitaskingmomma at 12:21 AM