eARC Review: Into The Fire (The Replacement Guitarist #3) by Lori Toland 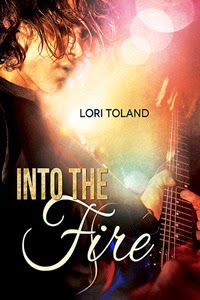 
When Blaze got his dream job, he never imagined within a year he would be fired. After a botched performance with Cassie, he’s kicked off the tour — and so is his boyfriend Jason — but Blaze is determined to live his dream again and he may have found the perfect band to do it with.
He will stop at nothing to be back on stage, though the costs of stardom may bring an end to his romance with Jason. Can Blaze have it all? Or will Blaze have to leave his first love behind to follow his destiny?

The third book in the series. Alas, there needs to be a book four. I really thought I could wrap it up in book three but Jason and Blaze threw me for a loop. - Lori Toland


That quote above, I stole from Goodreads  and it should have given me the hint that this was going to be a totally different book, and that, yes, it will throw me off for a loop. I should have taken more notice to that hint. grrrrrrrrrrrrrmeeeeeeeeeooooowwwwwwspiiiiiiiiithhhhiiiiiiissssspat!

Okay, so I have vented my frustration! There!

Now, for the review itself.

The title, Into The Fire, should already have been a warning that life for these two men is not a bed of roses and domestic bliss is definitely not going to last forever. Some things will come up, be they predicted or not, and they will unbalance anyone even if they think are prepared for it. For this third book of the series, it is one year after Blaze Shinozuka gets his dream job and lands himself a partner he will love forever: Jason Stockton. They have had a year of an almost blissful life and knowing the business they were in, both men think they have the right weaponry to protect themselves.

When both men get fired by that bitchy witch of a pop diva Cassie, both men are floundering and the question from book two, if their love was enough, is now going to be truly tested. Both men are at their most vulnerable in this installment and both of them seem to handle their little problem pretty well. They get closer, they realize their love for each other is getting deeper and they feel nothing will tear them apart.

When Blaze gets signed on with another band, it seems their life will get back on track. Then Cassie is back in the picture for the new band will now have to be the opening act for her new concert and, again, she pulls Jason in. With all of her instabilities and insecurities and bitchiness. This may be due to their long history together, but Blaze is livid Jason is concerned for Cassie and things spiral out of control.

As can be read from my words, I really do not like Cassie and I am now left wondering where this will all end? I was gobsmacked stumped when I reached the ending and obviously frustrated about it, but then again, I am a curious cat who can hissssss all I want. (I will have to demand for that fourth and last book. Summer according to the author)

What I loved about this story is how it ended. Does this surprise you?

It should not really for if and when you do read this, the story that unfolds will show how life can be unexpected and it should never be taken for granted. I have high hopes for Blaze and Jason, they are a solid couple and will get over this little bump in their life.

Let me growl: grrrrrr!!!! I am a huge Lori Toland fan and this book just solidified that fanship for she has written a book that made my heart thump so bad I felt it. I can only now wait impatiently and not so gracefully. I love Jason and Blaze and the thought of them together makes me smile goofy.... the thought of another book coming with these two is making me dizzy in a good way.


Posted by multitaskingmomma at 12:04 AM