eARC Review: Love Is A Fire by Lyssa Layne 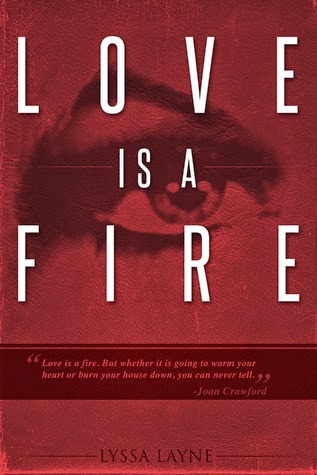 Love Is A Fire
by Lyssa Layne
Amazon

“Love is a fire. But whether it is going to warm your heart or burn your house down, you can never tell.” -Joan Crawford
Dr. Katy Malone has sworn off love after losing those she loves most in her life including her father, a member of the FDNY. She has decided to spend her time focusing on her medical research. Her ex-fiancée, and fellow doctor, isn’t ready to give up on loving her though.
Firefighter Nick Garrity is on a search for the future Mrs. Garrity. As he pushes thirty, with no prospects in sight, he’s afraid he’ll never find her. A devoted member of FDNY, he loves the thrill of his job and the satisfaction it brings him. He strives to teach the proby firefighter the ropes and pass on his passion to him.
When the proby tries to impress the guys on the crew, he ends up in the care of Dr. Katy Malone. One look at Dr. Malone and Nick knows he’s found his future wife, but can he convince her to love again?

There is no doubt that Love Is A Fire, especially in the way the Lyssa Lane describes it. The emotions between Katy and Nick are so strong, so intense that it burns up everything else in their lives except what the two of them feel for each other. Nothing matters. Not fear, not doubt, not guilt, or secrets, just the love that springs up out of nowhere.

Whirlwind romance is the best description. Meeting, living together, getting married all in a span of a few months leaves a lot of people questioning the reasons behind the sudden decisions. But if you've lost as much as these two have, it shouldn't be a surprise that they would live to the fullest and risk everything to have each other.

Katy feels that everyone she loves dies. That fear makes her push everybody close to her away. She only has casual friendships and refuses anything more. Until Nick suddenly shows up in her life. Then, it's like she's not herself. For him, she will take risks, even face her deepest fear of losing the only person she will love forever. Nick is her everything and giving her whole self isn't enough for her.

From the first time Nick sees Katy at the hospital he knows he's looking at his future wife. The Garritys all seem to have that gift of loving suddenly, deeply, and intensely. Katy's already told him she won't date firefighters but that doesn't stop him from convincing her otherwise. Once he literally gets her to fall for him, there's no stopping the feelings he has for her. He slips up a few times, of course, but Katy is at the fore of his thoughts and everything he does is for her.

This may be a quick read, but it's a strongly emotional one. Nick and Katy are so caught up with juggling their new relationship with their other passions - their jobs - that they barely have room to breathe! There's nothing more Katy wants to be than a successful doctor while Nick was born into his career, coming from a long line of firefighters. How they fit their desires into the picture makes for some extremely creative use of time.

Surprisingly, it's not her best friend that helps them weather the bumps of their marriage, but his. Jesse has been Nick's best friend since forever and while Nick has guided Jesse throughout their friendship, Jesse makes him understand the relationship with his wife much better, despite his being single. He quickly becomes a shoulder for Katy to lean on, too.

There are things I never expected to happen that take place in this book. While I absolutely hate some events, the sense of realism portrayed concerning situations and emotions make this an absolutely spectacular read. Can this happen? Yes. My cousin lives like Katy does when her husband goes off to fight forest fires so I can really understand how Katy feels. There is that gnawing sense of uncertainty every time he leaves and I don't think I would be able to survive if I was in my cousin's (or Katy's) place.

The only thing I hate about Love is a Fire is that Lyssa Lane finishes it with a cliffhanger - so, there is more to Katy's story than just this. It can't be the end at all because I want my answer to that unspoken question!