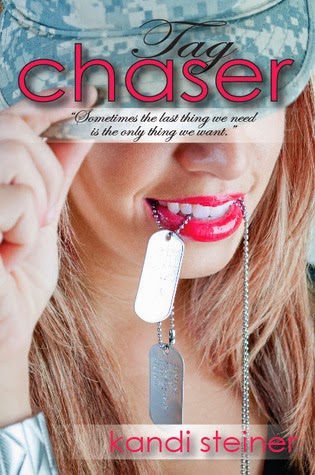 
Paisley Bronson is a 27 year old successful advertising professional, but the most exciting part of her life happens outside of work. Claiming the life of a tag chaser toward the end of her college career has taught her one thing - never get too close. She has enjoyed her dating lifestyle, but when her best friend makes a bet that she won't ever be able to date a normal guy, her competitive nature takes control and she vows to change the game.
When Paisley meets the incredibly handsome and practically perfect Corbin Ray, she begins to think keeping her word might be easier than she thought. But when an accidental discovery reveals that Corbin is in the Army, she knows she must run the other way and never look back. Although it kills her, she aims to move on and look for a new prospect.
There's just one small problem.
Paisley's been assigned a new client at work, and his name is Corbin Ray.
Will Paisley and Corbin give in to the chemistry between them, or will their past and present complications keep them apart?
Immerse yourself in this fun and irresistibly naughty game of cat and mouse.

For some reason, the title, Tag Chaser, meant something like shopping addict to me. I was so thankful that it turns out that Kandi Steiner's character Paisley chases after military dog tags, not price tags. That's immensely more interesting.

Paisley is a woman who is hurting but won't admit it. She hides behind fleeting relationships with soldiers about to be deployed, knowing that they're just looking for a good time and she'd never had to see them again.

That is, until she bumps into Corbin. Never has she seen a finer specimen of a man and he's a gentleman to boot! The only problem is, she's just made a bet with her best friend that she won't date military men for a whole year - and Corbin is about to be deployed.

She's not willing to lose, so she runs out on him. Until she runs into him again the next day when he comes in as her new client.

Corbin is one perfect man, if only he wasn't in the Army! But he tries to get Paisley to see things his way and convinces her to at least try to have a relationship. Or does he? No matter, Corbin is determined enough to break down Paisley's walls and make her see that he's worth the risk.

This storyline is rather common; there are quite a few men and women who are attracted to a no-strings relationship, and what better than with a person who they're sure they'll never see again? The only difference is, there aren't any stories that I've read that use this very plot as the basis for a book! Maybe it doesn't read as romantic? However, it works extremely well here.

To me, Paisley is a strong woman - to a point. She's admitted her trauma to her best friend but doesn't want to be constructive about it. Instead, she's slowly self destructing by engaging in flighty relationships. I found her a bit neurotic in some parts but can understand why she felt so betrayed by someone she adored.

Maybe Corbin is too perfect? He's honest, open, caring, romantic... Maybe this is more than one man? Although he does get jealous, so that's one flaw that makes him human. And he feels guilt -- score two. Can't think of anything else wrong with him, though.

All things said, this is a very original story and I really, really enjoyed it. There were no slow parts and the flow was just perfect.

Then there are the secondary characters, who make the story even better. Tanner is a wonderful best friend; he reminds me of a few of my male friends who are just as caring and sweet. I'm hoping when his story is told, he'll bask in the spotlight just as much. And McKenzie! When will her non-relationship relationship finally leave the friendzone?

Tag Chaser is a highly entertaining, light read that will leave you wanting more. Kandi Steiner is working on the second installment and I am left waiting impatiently...