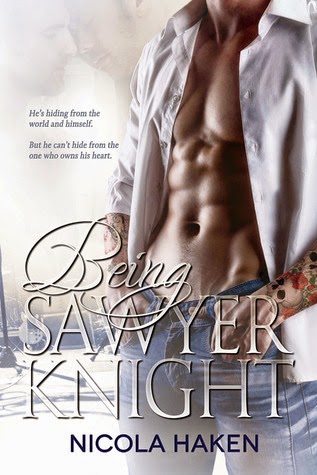 Being Sawyer Knight
by Nicola Haken
Published May 27th 2014
Smashwords

As lead singer and guitarist of the internationally renowned Souls of the Knight, Sawyer Knight is living a life most men can only dream of. He’s surrounded by music, fame, wealth, women throwing themselves at his feet. He has everything…
Yet he has nothing.
Life as one of the world’s most sought after rock stars is tiring, oppressive and lonely. He spends every day being who the world wants him to be, who his manager tells him to be, who his mother expects him to be… all the while fighting against who he really is. Truth is, he’s used to it. He’s actually gotten pretty good at pretending… at living the lie.
Until Jake Reed, his ex-best friend and the only person who’s ever made him ‘feel’, waltzes back into his life as the band’s new head of security. Jake wants Sawyer – always has, always will. Now, he just needs to get Sawyer to admit that he feels the same…

“You will be mine, Sawyer Knight. The faster you try to run the quicker you’ll fall to your knees. Then, Sawyer… then you’ll be too weak to resist.”


Sawyer Knight is a highly talented, admired and sought after star. Lead singer to Souls of the Knight, his is a life we see from magazine covers or late night shows. We admire them, we stalk their pages, we even create bogus pages for them in hopes they would take recognition; we even name our twitter handles after them and gain thousands of stalker-followers. What not one of us take into consideration is: How is it Being Sawyer Knight? It's a difficult question, we can never be in anyone else's shoes, therefore we will never know how it is to live life with a whole lot of people surrounding us, have millions of dollars, be targetted by the paparazzi and hounded.

Sawyer is lonely. He is a star, he is loaded, he has acquaintances. He has only two people in his life he considers his best friends: Elle and Kip. He had lost one other person, the one that counted the most, all those years ago, one Jake Reed, his bestest of friends. The one person he could never be true to.

Jake Reed had been in love with his best friend for years, including the years they were apart. Now that he is the head of security for the band, he is not going to take no for an answer anymore and he is not willing to let go. The one problem, will Sawyer accept him?

The relationship that developed between Jake and Sawyer during the tour was not the stuff of legends. It was more like Jake making demands and Sawyer bulldozed over by Jake. Thing is, Jake had to do this, Sawyer was a scared individual, and he did not want to deal with the press should it come out he was finally getting his happy ever after with a man. Sawyer did not really take to stress really well, so he would just go for all the women thrown his way to cover his tracks. Jake's presence not only rattled his little lonesome but uncomplicated world, he also managed to make Sawyer see a future without stress, being out in the open, and finally, just to be happy for once in his life.

This was beautiful. I really cannot say more should I ruin this review with spoilers. This is a story with a whole lot of drama treated lightly. There is a mystery and some thrills as well, but again, all treated lightly. Sawyer's decision at the end, this was the most real of them all and made me see that theirs was a relationship that will make it.

****Shout out to Ms Reese Dante! Awesome cover as usual!
Posted by multitaskingmomma at 8:59 PM