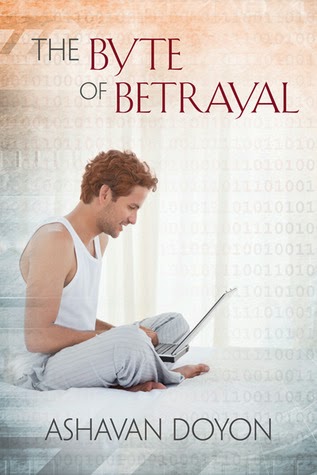 Caleb McDonnell lives his life online. A thirty-year-old fast food worker, he spends his time talking in an Internet world where his job and living conditions can't dictate his friendships. He's found acceptance, friendship, and even romance. But when an online friend is revealed as a fake, Caleb loses all sense of trust. To stave off the emotional collapse of his betrayal, Caleb leaves his online life behind and retreats into the monotony of his job.
Nicodemus Rokos feels like his heart has been torn out. He knew Caleb would be hurt, but he'd hoped not to be shut out of his boyfriend's life. He can only hope Caleb still feels something when he shows up in person to reclaim what he's lost.


The Byte of Betrayal is a very, very timely and common plot. It is a plot that is very real and can hurt a lot of people in the process. In the worse case scenario, it not only ruins lives and reputations, it could also be deadly. For Caleb McDonnell, he never thought he would be in that place where betrayal from someone he thought of as a best friend. As is most common these days, the sense of invincibility victimizes a whole lot of people when chatting from behind the keyboards, and Caleb fell victim to it. Feeling betrayed and stupid, he locks down into himself.

Nicodemus Rosos was another great online friend. In fact, even without meeting each other eyeball to eyeball, Nic fell for his online friend Caleb and unknown to Nic, Caleb falls for him too. The betrayal that rocks their world not only places their online relationship in jeopardy, but their personal lives as well. What Nic is about to do may not be the best or even logical thing, but he must do it. He must reach out to Caleb.

This is a plot that many may think is impossible but frankly, I have attended both weddings and funerals because of this online friendship thingy. How about those teens victimized by so-called online BFFs only to be lured into a life that is both illegal and deadly? Reading this, it was quite easy to be in the shoes of one Caleb McDonnell. It was quite easy to see myself in his place as I, too, have been victimized by so-called online friends who not only show their bright, traitorous colors in the end, but also effectively ruin a reputation.

Ashavan Doyon, in so little words, successfully showed how online relationships could go wrong, or right. For this short and light MM romance, it is apparent that the two men will try to make a go of their lives, this time offline. This is not HEA, this is definitely not even an HFN. It is an ending that is very real and logical.