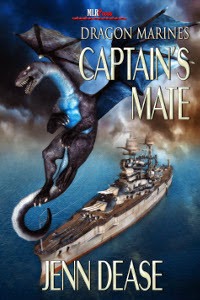 Can a Dragon and human solve the problems on a naval ship in the middle of the Pacific while falling in love?
Patrolling in the Pacific Ocean, there are problems aboard the USS Ronald Reagan.Newly appointed Lt. Commander Franklin Delano Michaels is sent to rectify the problems between the Marines and the human sailors.When he meets Marine Captain Danegeld Drake, the Dragon shape-shifter in charge of the Marine squadron, there's an attraction that takes them by surprise.
There are more problems aboard ship than Franklin knows about.A Dragon shifter doctor whose infirmary is being sabotaged.A Dragon/human mating between one of the Marines and a Sailor.A plot against Dragons throughout the military.And a possible build-up of the Voldai, an enemy that almost defeated the allies in the 'Almost War'. Can the two of them build a future together with all this going on?

This should have more press! Seriously!

I chanced upon this new novel because I wanted to read something Fantasy after having had to deal with a lot of contemporary the past week. The cover leaped out of that page and beckoned me. I could not resist even if I never heard of this author, did not really get the blurb and most of all, no one had made mention this to me at all.

This is a fantastic book set in dystopian Earth, after the world found itself under a war that almost annihilated both human and dragon populations. This is a world where dragons and men lived side by side but circumstance never drew them close, until the Almost War. This war was introduced to the readers before the story opens. It provides for the right setting and allows this action-packed-military-drama to unfold...

...and what a surprise it was! Totally unexpected.

The story opens to one Franklin Delano Michaels receiving orders of a transfer and a promotion. He has been made a Lt. Commander and Liaison Officer to a beleaguered USS Ronald Reagan which Dragon Marines and human navy staff were at odds with each other. Once he steps foot on the Reagan, he immediately seizes upon the tension, the discordance, the disunity and much more between the humans and dragons. To top it off, he immediately gains insight to the mystery of saboteurs but cannot pinpoint if the danger is to the humans on board, the dragons, or both.

Marine Captain Danegeld Drake is the Dragon shape-shifter in charge of the Dragon Marine squadron. He had requested for a new liaison officer to settle the simmering chaos, hoping they would get someone who at least knew some of their language. He got Franklin Michaels who not only only could speak Chumb, the Dragon language, he is also his mate.

Now, this is a plot that has been seriously overused and abused through the years but this one, hmmmm, somehow this one is a bit different. The difference really is the manner of which this was written. It was done with such precise and concise detail it was immediately coherent and visual. The detail to which the action sequences, politics and tactical planning may not have been done to perfection, but was just as great. In short, this is not a short read but due to its fast-paced sequences and lack of drag for drama, it came out stellar and a huge surprise hit for me.

I have never heard of this author before, but she is someone to watch out for. I have my eyes set on this Chef-turned-MM-author and this Marine Dragons Series is a new favorite of mine. I hope author Jenn Dease follows this through just as spectacularly as this first one for now I cannot wait for that next installment.

Posted by multitaskingmomma at 7:49 AM