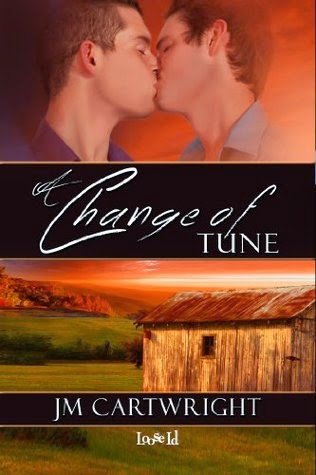 Johnny Rayne has had enough--enough of being at the top of the rock music industry for the last decade, enough of constant touring and recording. He wants something more--something very different. Moving to a farm in West Virginia, Johnny runs smack into Sheriff Virgil Grissom his first morning in the mountains.
The sheriff challenges Johnny in a multitude of ways--with overt machismo, disdain for Johnny's musician past, and all-around know-it-all-ness. The two men clash continually, and Johnny resists succumbing to the sheriff's brash charm until Grissom forces him to admit some very basic truths.
One: Johnny's definitely attracted to men. Two: Johnny's definitely attracted to Grissom. And three: Johnny's definitely going to enjoy every moment of it.
Note: This novel was previously published. It has been substantially revised and re-edited for this release.

I read A Change of Tune way back in 2011 or was it 2012? It was one of my first MM reads. It got my attention because of these words: Elkins, West Virginia. It is a place very dear to me as I went to school in the local college Davis & Elkins and of course holds lots of good memories. Imagine my surprise, and delight to see that J.M. Cartwright decided to release this 2nd edition with a warning of changes and addition to the content.

I cannot help but compare the two editions. Because this second one changes the name of the city or town. I must admit to being a little upset, but I am happy that the college was still mentioned, and the county, and the streets, etcetera. Not much of the city description was changed except for the name.

The second change was the beginning of the books. This second edition, I am not so happy with. I feel the first edition paved the way to how Johnny reached his decision to leave the band he created and managed brilliantly. It showed the conflicting emotions within him and his despair to missing out on a need he craved for: a family. It also showed more focus on his relationship with his band members although they were mentioned only in passing. Finally, it also showed a deeper relationship with Cece, his agent. The change or removal of these details from this second one left me thinking that if I had not read the first edition, I would be lost. I would be wondering why he decided to do what he did. Although if one continued further on in the read, it would be revealed through a flashback.

The biggest change I must say is the relationship between Grissom and Johnny. The relationship between the men in the first edition was quirky, sappy, erotic and many times funny. Johnny's reactions to Grissom especially was what made me laugh. Grissom, on the other hand, was a bit high handed in the first edition and was quick to the draw when it came to actions and decisions regarding their relationship. In this second edition, the two men communicated better and Grissom was better able to communicate his taciturn thoughts and so should have given me a sense of satisfaction that these two men had a better future together.

I think I have read the first edition no less than ten times and I have to be honest: I prefer the first edition more. Blame it on the change of the city name, or blame it on something else, I don't really know. I do still recommend this one, though, for first time readers, for it is a nice book.

But truth be told: this second one, I like. The first edition, I loved.