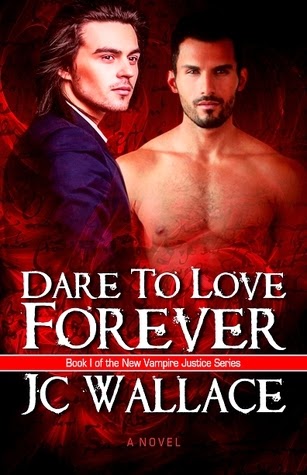 Carson Locke is a Tabula Rosa vampire—a dangerous rarity in the world of vampires. With one bite, he can wipe clean a vampire’s mind, creating a mindless drone. Because of this, Carson has spent his entire twenty-three years sheltered at home. That changes, however, when his entire family is murdered. On the run and near death, Carson meets Commander Lincoln Samuels, a beautiful vampire who tries to heal him. In doing so, Carson is bonded to Lincoln and turned into something the vampire world has never seen.
Lincoln is a Sanatore vampire with the ability to heal other vampires. He heads a team in the New Vampire Justice police force in Utica, NY. Late one night, he’s called to a local Vampire Blood Market where a starving Tabula Rosa vampire is about to be executed by one of his officers. Feeling a strong connection to Carson, Lincoln wants to heal the broken man despite knowing the risk in doing so—it could destroy Lincoln and cost him the chance to love again. And he soon discovers there’s a greater evil threatening to take Carson from him.
Can two vampires who have loved and painfully lost in the past learn to trust one another, defeat the evil rising against them, and dare to love forever?

I know I am not the first to say this, but Dare To Love Forever by J.C. Wallace is a very, very different breed of Vampire book. Of course, this is a plot that is very formulaic: the vampire, the angst, the drama, the mating, the bonding, the biting, the strength of mates, blah blah blah. But that is as far as it goes for formula. The rest of this tale, it is unlike I have read so far.

We have two rare vampires here, one rarer than the other. One is Carson, a Tabula Rosa who had been raised far from society and kept secret from both friend and enemies. When he discovers his family murdered, his mother's last instructions were to seek the help of someone, and to run. He ran but was unsuccessful in finding the much needed information and help. Starving, he risks all to get some blood, but is caught and injured. Second is Lincoln Samuels. To save his life, Lincoln, a rare Sanatore vampire, decides to heal him. The result is a blood union of two rare breeds, resulting to a bonding even rarer and a variety of vampire in the person of Carson. An anomaly no one had ever seen or heard of before.

When these events unfold, all thoughts of 'formulaic plot' disappears into the background.

Carson starts out a frightened and naive young man, but he quickly grows up, so to speak, when his power kicks in. It is something innate and he does not understand it, neither does Lincoln who could only react to his bond-mate's feelings and thoughts. With both their powers combined, no one really knows what to make of this duo. The only thought that ran through my mind when reading this was: holen! holen! holen! - in reaction to the fast-paced action and unfolding events.

Take it this way: I just positively inhaled this read in less than two hours and I was exhausted from a hard days' work. I was unwilling to put it down. I rated this a four (4) stars last night, but as I found myself dreaming Carson and Lincoln. Well, that raises the rating in my opinion. I cannot argue with my subconscious loving this so much LOL

Posted by multitaskingmomma at 12:03 AM