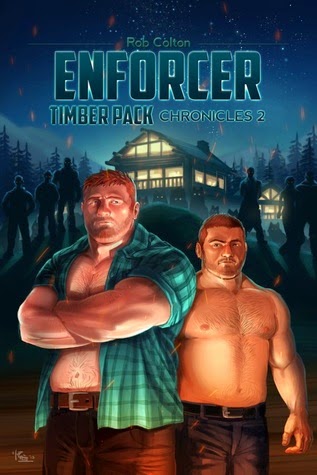 Jed Stone suffers in silence, damaged and poisoned from his fight with the rogue wolf. But he puts on a smile and does his duty, making sure his Timber Pack mates are safe.
Buzz Hinske belongs to a traditional lycan pack. Challenges and violence seem to be their way of life.
When they come together at the annual Lycan Conclave, Jed is elated at finding his destined mate. Unfortunately, Buzz has already been promised to another...

I have seriously fallen in love with the Timber Pack Chronicles. This is one series where the author, Rob Colton, surprises at every turn of the page. In the first book, it was the courtship of the alpha Colton and Patrick. It ended with a sad note for Jed. This one opens on that sad note and gives us Jed's story, of how he meets his unexpected mate and how they both deal with the pack mentality and politics.

I wanted to write a little summary of the story but decided to cut it because of the temptation of spoilers. All I can say is that this is a different book from the first one. The first book was the rise of the new alpha, the pack politics, his courtship with Patrick and their sexual interludes, both erotic and romantic. For Jed's story, it is more along the lines of how a young enforcer has to deal with difficulties handed to him, how he has to deal with the thought of never claiming his mate, and of other fears. The angst really focuses on Buzz and his own pack and alpha. His is not a favorable life and it is up to him to make a decision, to whether be a part of a pack where he cannot live free and be killed at the dip of the alpha's head, or live with a fated mate who will not only be true to him physically, but will always be there to be supportive and loving. He also has the choiceto live with a pack where fatal danger is offered as desert or live with the Timber Pack and be happy with a mate and a family that loves him unconditionally.

This book made me fall in love with the series and it took me longer to write this review because I just had to go back and reread Timber Pack Chronicles (Timber Pack Chronicles #1) once more. I could not but help going back to when it all started, when these young men first built a pack for themselves, not knowing where their road will take them. With the way this ended, with the hints left in this book, I cannot wait for what's next to come.

Posted by multitaskingmomma at 12:20 AM