Review: Hard to Kill (Return of the Originals) by Aeryn Jaden 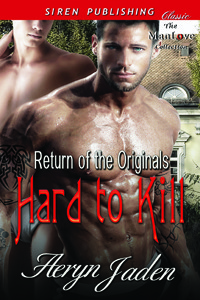 Hard to Kill (Return of the Originals)
by Aeryn Jaden
Published May 29th 2014 by Siren-Bookstrand, Inc

Hard To Kill Originals is what this story is really all about. Not to mention, the Phoenix can die and relive several times over, unlike a cat who only gets nine. Then there are the drakons who are just as long lived and have their own secret to life.

This is another take on paranormal shifters but this time, it is about the orgins of the species and their society's internal conflicts and war. One of the Drakons, Kale, was targeted for assassination by the Council which sends over their best assassin. Who just ended up being the target's mate. Who just had to kill himself to save his target mate. That was around five years ago and now, now that Phoenix rises once more and throws things into chaotic splendor.

When Aeri wakes up from five long years of death, rebirth, and more deaths, he is cranky and hungry. Also angry. His mate is a Drakon, which does not really matter. What does is he does not want a mate right this instant but his Phoenix is purring and wants to claim. Of course, Aeri's mate, Kale, is willing but is also afraid for his mate's life. He may be the ruler of their society, but there is a lot of danger going on and he and his family are always targeted, so he has to be very careful.

Now, I am usually not one to complain about editing, but this time, I think I should really make a comment about it. The one reason why I did not rate this book higher was because of the editing. Not the author's fault, I must insist on saying this. The author had the vision, had the story, and it was a great one, it was just ruined because of the editing. I mean, how can one individual go from 'his' to 'their' then back to 'his' in one line. Another, how can the plot shift so drastically, without warning and such? True, the Phoenix was an entity separate from Aeri, but jumping from their different points of views was very very VERY confusing. Instead of making me enjoy the unfolding of incredible and fantastical events, I ended up going back and forth trying hard to decipher and translate what the author was trying to bring across. I don't want to add more but there were also a whole lot of confusing grammatical errors going on here. **shuttingupnow**

Posted by multitaskingmomma at 8:00 PM