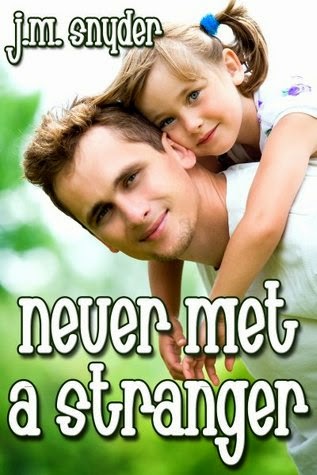 English professor Gavin Dozier hasn’t had much luck when it comes to love. When his last boyfriend cheated on him, he was driven to experiment with women. Sex with Marian, though, had its own dangers, and before he knew it, he was a father. Now estranged, the only thing Gavin and Marian have in common is their daughter Evie, a precocious seven-year-old who stays with Gavin every other weekend.
While out with her daddy, Evie meets the heavily-tattooed Brody Phelps, a sketch artist with serious talent who still dresses like a brooding punk rocker, even though he’s in his thirties. Brody is instantly attracted to the sexy college professor, but knows Gavin is out of his league -- the man has a kid, which probably means he isn’t gay, and besides, Brody never even graduated from high school. Guys like Gavin don’t go for guys like him.
But when Evie leaves Gavin’s cell phone behind, Brody has the perfect excuse to meet up with them again. To his surprise they hit it off, and when he asks Gavin out, the professor accepts.
Even though Evie brought them together, will her demanding personality pull them apart? Is Gavin ready to trust his heart to someone else again? Can Brody overcome his own fears of inadequacy and let Gavin in? And what will Marian have to say when the father of her child starts dating again?


This was a nice little story about a man and his child, his baby mama and his boyfriend. As single parents, Gavin and Marian were faced with the challenge of raising their little girl by sharing responsibilities. Marian was surprisingly the clingy one and had a lot of drama on the side which, fortunately, never overwhelmed the romance developing between Gavin and Brody.

Brody, despite his history and appearance, was the surprising character for having the least problems. Maybe because he was not a parent and maybe because his personality was laid back and relaxed. He took things one day at a time and lived with it. Having Gavin in his life was a surprise but once he realized this is the man for him, he made sure to never let go.

Gavin had a lot of things going on in his life, but once again, he is the type of personality who takes things easy. He is not very laid back but he appears to be so. His patience is so strong and long I found myself jealous.

The complication, but not really a complication, was Evie. This little girl is bratty, irritating, intelligent, fun loving, giving, has a heart of gold and so accepting. She acts her age and despite her not so functional family, she was surprisingly well-adjusted. And terribly intelligent.

The interaction between these characters was a delight to read. They were a normal people who lived their lives daily and just went with the flow They had their ups, their downs, their ice creams and movies. They had fights, too, but not that much. All such a normal family.

This is a really different romantic read for there is nothing outstanding in the lives of these characters and yet reading about them was simply fascinating. It's simplicity was key to entertaining me and before I knew it, the end was reached and life was good.
Posted by multitaskingmomma at 8:45 AM