Review: No Defense by Shelley Munro 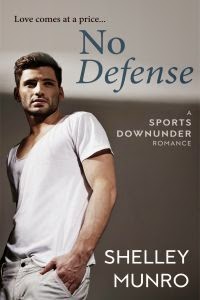 Tyson Hamlin lives and breathes rugby, and with his natural talent, he’s destined for the big time. But Tyson has a secret—his perfect life, complete with doting girlfriend—is a lie. While he loves the game, he’s not as driven as he used to be, and his girlfriend is a beard he hides behind because the truth is—he prefers men.
Darcy Nichols transfers from Dunedin to pursue his dream to make the national team. He’s giving his all this one last season and intends to focus on his goal. Openly gay, he arrives in Auckland to suspicion and hostility.
One look at Darcy and Ty is smitten. He wants the sexy Darcy badly. Game on. The sparks fly in private as they burn up the sheets, but they can’t live in seclusion forever. They’re under public scrutiny, and one wrong step could derail their rugby careers and end their dreams forever.
Previously published.

This is the story of Tyson Hamlin, a rugby player who only came into the sport because of the unfulfilled dreams his father had. He is a good player, well better than good really, but his heart was not in it. He was more dedicated to his studies in Sports Medicine and he dreamt the dream of quitting the sport. One day. Today though, he is playing it cool and straight. Until Darcy Nichols walks into the locker room.

Darcy Nichols transferred in from Dunedin and he is a great rugby player. He is also openly gay. When he came out, he successfully filtered who his friends really were. He came to play. He loved the sport. When Tyson befriends him, he pegs him as straight and they became friends, until Ty asks him to kiss him.

The two men's secret love affair was a difficult thing to handle, especially in this day and age of multi-media that can circulate an image to the rest of the world in seconds - photoshopped or not. As they continue their affair, media are speculating but could not prove anything. When the worst test is thrown their way, they needed to make a decision: to play or not to play.

This is a short and light read so I finished this in one sitting. I was fascinated with the world of rugby, even if I know nothing of the sport nor could never imagine the moves as written in by the author. I do know that this is a super rough sport and that there was a British rugby player who came out years ago, and highly respected for it and his play. This back story gives credence to the romance between Ty and Darcy. I liked reading their light romance especially as there was not a whole lot of angst within the drama unfolding and the men were real in their actions and decisions.

Great for an afternoon read.