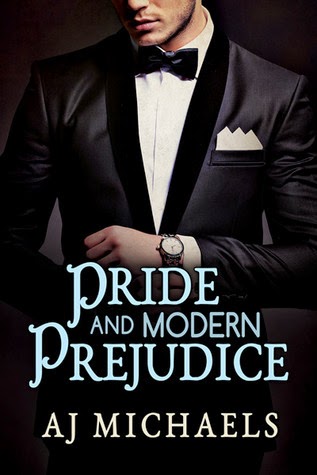 What happens when Jane Austen’s immortal characters are thrust into 21st century Pennsylvania, with an all-male twist?
Liam Bennet has always been a good judge of character, but when William Darcy is thrown into his social circle, everything spins out of control. Darcy is proud, cold, arrogant—and strangely captivating. When Liam’s brother and Darcy’s business partner start seeing each other, Liam cannot avoid this enigmatic businessman. But does he want to?
As Liam struggles to find his identity in college and acknowledge his feelings, he must deal with the fortunes of his four brothers, his gossiping mother, and the possibility of a large inheritance that could save his family from financial ruin. Emotions come to a boil when George Wickham, a world-weary musician, stumbles into town and ignites a feud with Darcy. He threatens to expose a long-hidden past, and Liam must decide for himself who William Darcy really is and what he really wants.

Everyone who knows me know of my love for Jane Austen. I have lost count the number of times I read Pride & Prejudice since I first read it way back in grade school. To say that I practically have that novel memorized is an understatement as I live for Mr. Darcy and just loved how Colin Firth portrayed him and, of course, the young Matthew Macfadyen did a wonderful job as well. When I saw this modern and MM take on the classic novel, I could not resist. The only thing that kept me in doubt was not knowing who the author was. No matter, I took the bait and never regretted it for an instant.

There is no need to rehash the whole plot, those who read know who are involved, Mr. Darcy being one, Mr. Bingley being the other. In the original book, the two men fell for sisters Elizabeth and Jane. For this modern MM take, it is brothers Liam and Jamie.

From the moment the story begins, it is immediately apparent that the author is a huge Austen fan. There was no question in my mind of the love for the characters for there was a seamless transition from the original female character to the male one. As Elizabeth was the perfect portrayal of Victorian femininity, Liam was the stereotypical modern/urban educated male who comes from a loving family. He is secure in his masculinity and thus was supportive of his openly gay brother, Jamie. Mr. Darcy, well, he remained the enigmatic and quiet man whose inner strength and intelligence made him a bit unsociable. The clash of personalities stayed true to the original novel.

Their romance stayed true as well. Quiet, slow on the uptake, and chaste.

The main change was, obviously, the main characters involved were all male. There had to be some sort of angst in the plot that should differentiate it and there was: Liam's realization that he was having feelings for another man. He never thought of himself as gay. In fact, he had been accused of being pansexual or simply not interested in anyone. With the realization came the shutting down of emotions and his family realized it, even if he did not.

Pride and Modern Prejudice is a modern take on the classic novel that has seen so many interpretations come to fruition, including one involving zombies (I will not even think about that one). So it comes as no surprise that an MM adaptation finally comes around and it is done beautifully and faithfully. The author not only made my dreams come true, it also solidified this one fact: I am absolutely, very much still, in love with Mr. Darcy. And I always will.

Highly recommended for all Austen fans who love the MM genre.

Posted by multitaskingmomma at 10:17 PM