Review: Strength of the Mate (The Tameness of the Wolf #3) by Kendall McKenna 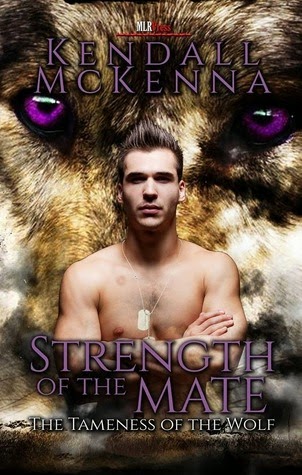 Rampaging werewolves cause the True Alpha to send his Omega, Dawson Rivers, to bring them under control. Can Adam Madison help or hinder Dawson's mission?
Adam Madison is in Iraq, driving supply trucks for the Marines, but he still can't outrun his personal ghosts. Outside the wire, insurgents are a relentless threat. Inside, renegade werewolves are a constant danger.
Dawson Rivers is on a mission for the True Alpha---bring the rampaging shifters under control. Adam proves to be invaluable to his task. Their intense mutual attraction explodes into a powerful physical, and emotional connection.
Their future together is in peril, when Adam's convoy is ambushed.Can they learn to rely on the strength of their bond? Adam staying alive long enough for Dawson to find him depends on it.

I was so looking forward to this, and it did not fail. It lived up to all expectations and gave more.

This is the third installment to The Tameness of the Wolf series where the world is in full acceptance of shifters living amongst them, influencing histories, literature, wars and civilizations. Where homosexuality was just an everyday occurrence. It is a world that parallels more or less much of our own world but just from a different perspective. It is far from Utopic, but it is definitely more accepting.

This third book opens right after the second book ends and it continues the story of Dawson Rivers, the Omega of Noah, that intense Marine Corps' True Alpha werewolf everybody is in awe of, especially when Lucas is around, the one Dominant and Sentinel to the pack. Noah sends Dawson off to Iraq to investigate on a series of incidents that breaks both human and shifter protocols and laws. When he sets foot on the camp, he encounters Adam, the younger and broken brother of Major Tim Dawson whom we all know is the bonded mate to a civilian True Alpha and commanding officer to Noah and Lucas.

If confused with the plot and character relationships, stop reading right now and pick up the first and second books. Don't worry, both are awesome reads!

Adam has seen some things going on in the camp between shifters and humans he did not agree with but as he was not armed with the knowledge of shifter culture or laws, he did not know what to do. This did not stop him from becoming friends with three weres at all. He resented the discourtesies but he really did not know what to do. When he finds out that Dawson was coming in, he resented his presence thinking his elder brother Tim was keeping tabs on him. That was soon sorted out but the chemistry between these two men was hard to ignore and it had been simmering even back stateside so the obvious turn of events unfold.

And that is where the ordinariness of this plot stops. This is no ordinary story - not even a shoe-in between installments. It reveals a whole lot of things that were left unattended in the first two books and it actually makes me appreciative of the work the Dominant and his True Alpha were faced with. There was a whole lot of discord, insubordination and stuff that were hard to pin down but had to be stopped. Dawson's role has changed and so he has to implement the word of Noah and make sure all shifters and humans knew about it. The real strife here is how to go about implementing the changes.

There are new discoveries, there are new mysteries, and then there are answers that were finally revealed. There is one question left unanswered, though, not even addressed: what happened to the plan to use Lucas and Noah as the ultimate weapon by the US government? I guess we have to wait for the next installment. Can't wait!

This is a fantastic read, especially as I took the chance to just read the first two once more. What I really like about this series is that reading it the first time addicted me to the story, but reading it twice, thrice and more just made me appreciate how convoluted this plot is and how intriguing it is to discover new things again and again. It is a series I am not shy to admit having read more than four times. Well, this third installment only once for now, but it won't be later.