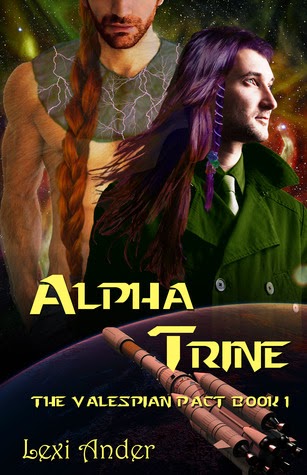 Zeus was two months old and the sole survivor on a science vessel in deep space found by the Mar’Sani. The blind infant was swept up by the grieving Empress Ashari and adopted by Emperor Valdor Vondorian as their fourth child. Zeus grew up in a loving home but his frailty as the only human among his strong reptilian brothers caused his parents to seek the help of the Chtichlians, the expert arachnid geneticists, to fix their son’s sight.
Zeus discovers that having his sight is harder than being blind and he learns to not trust his eyes. His family believes he is the reincarnation of their lost child Canry, but there are those Mar’Sani nobles who only see him as the orphaned human, and not worth of the Emperor’s family name.
Dargon Kal-Turak is a Dar Massaga, he and his symbiote, Alpha; command a ship of manned by members of some of the most dangerous races. After narrowly escaping a trap, Dargon and his crew dock at the spaceport for repairs. It isn’t long before the Psonics have their location. Dargon snatches the Master Mechanic and limps out of port not realizing he has bought more trouble…and maybe the answer to salvaging the Valespian Pact.
Content Warning: M/M/M-Alien. Yes, this means that there is hot alien smexin'. 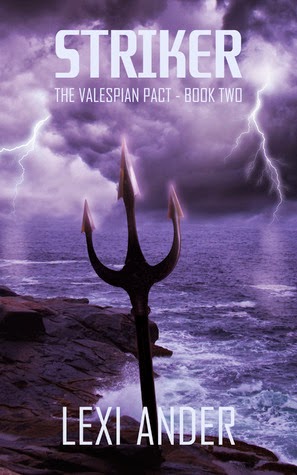 The peaceful respite for which Zeus and his intended, Dargon and Alpha, had been hoping is shattered when Zeus is unexpectedly drawn to the Waters of Poseidon and told that the safety they've been promised is a trap.
But the Fal'Amoric aren't the only important cargo on the Oethra 7, and countless others are depending on the success of their mission. If Zeus hopes to break the silent siege on Valespia, and protect those most precious to him, he will need not just powerful allies but the fortitude to survive overwhelming odds.

Oh, Fadia knows me well hehehehehehe. I saw her message and it is seldom I see a recommendation from her that I immediately decided to take a look at Striker. I had thoughts of guns and amos but the cover clearly shows Poseidon's Trident. Okay, not a good thing. Then I saw it was book two. grrrrrrrr I had to take a peek into that first book and - okay, color me confused. But when this woman recommends something, I have to listen. And WOW!!!!! I am so glad I listened!

For the first book of the Valespian Pact series, it was clearly a very amateurish piece of work. I have to be honest that I also got bothered by the obvious lack in editing. However, it had a very interesting plot: a blind human baby taken in and raised as the son of an emperor. Reminded me a bit of Moses at some point but then the different aliens came tumbling in. Being used to franchises like Star Wars and Star Trek, it was nice to see the same translate into an MM romance.

As a young boy growing up with his siblings, Zeus realizes he is different from them. Yes, they all loved and accepted each other but it was like seeing a cat raised by dogs where the meeeeooooowwww becomes a meow-meow. Zeus grew up a  Mar’Sani, a warlike but peace loving amphibian species which culture was steeped with traditions. As a young prince, he was allowed to be trained in the martial arts but because of his obvious differences, like the lack of a tail, he was not considered a warrior. Disappointed, he turns his sights into academics and is soon assigned as a Master Mechanic of a busy space port.

Dargon Kal-Turak, a Dar Massaga warrior, catches scent to a potential mate. Imagine his disappointment that it turns out to be in the form of a human, a race he held an absolute dislike and distrust of. When their paths cross, there is an instantaneous recognition between Zeus, Dargon and his symbiot Alpha. All things considered, this should have been a simple story, but then it turns into an action packed alien-space adventure that was very  hard to put down.

The first book introduces the reader to the story arc but when it ended, it left a whole lot of things unanswered and ill explained. It was not that satisfying a read and if I had read this years ago, I would not have liked it at all.

But with the second book, Striker, the perception is changed. It is a very, very different book from that first one. In the first place, this book is far from amateurish! It is a well written epic space adventure which action sequences were fast paced, highly visual and so full of suspense it was impossible to put down. Bring in the heartwrenching back story of Alpha and the appearance of the young kits, it was enough to make me fall in love with the series. The romance between Zeus, Dargon and Alpha was at times sweet but then turns to the highly erotic. A big plus was their relationship did not stagnate at all, in fact, it grew stronger as the story unfolded.

Although the focus of this series is really on these three individuals, there were also the very important supporting cast of characters that captures the imagination. Truly, if there is going to be a third or fourth book, I have no idea who it is going to focus on although I vote for Prometheus.

Overall, there was an obvious growth to the writing skill of Lexi Ander especially as I got to read these two books back to back and I got a nice comparison. It was very clear that the first attempt was lacking but the series more than made up for it with the second installment. So even if I cannot recommend the first book, it is still recommended as the all important first read before touching on Striker.

Posted by multitaskingmomma at 5:57 AM