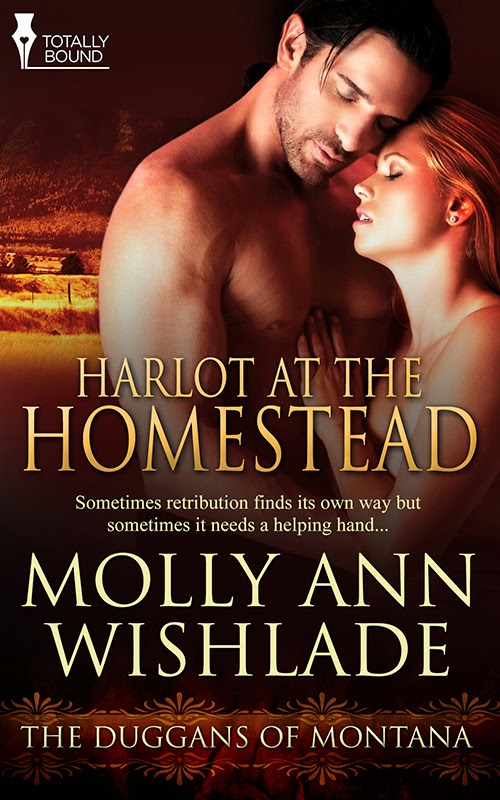 The Duggans of Montana work hard and play harder.Kenan Duggan looks out for his twin sister Rosie,and Matthew and Emmett, their two younger brothers. The Wild West is a toughplace to live and each one strives to carve out their life on the land whilstbattling the prejudices, contradictions and restrictions of an ever changingsociety.They say that blood is thicker than water…but canthese siblings find love and still hold on to family ties?

Harlot at the Homestead Blurb:


Sometimes retribution finds its own way butsometimes it needs a helping hand.When Catherine Montgomery shows up at Kenan Duggan’shomestead, she expects him to be surprised. She’s been gone two years and she’sdevastated to hear that her former fiancé was forced to give her up for dead.Catherine never stopped thinking about Kenan andhoped that they’d be reunited one day. She has suffered at the hands of anotherbut nothing tortured her as much as being apart from the man she loves. Shedoubts, however, that Kenan will be able to forgive her when she reveals hersecrets.As Kenan battles his desire for revenge, theirmutual desire reawakens like a creek bed in the rain, and soon they are sweptup in rediscovering their all-consuming passion.Retribution often finds its own way in the Wild Westand the men to blame for Catherine’s disappearance may well find themselvespaying for their crimes in unexpected ways.That’s if Kenan doesn’t get to them first! 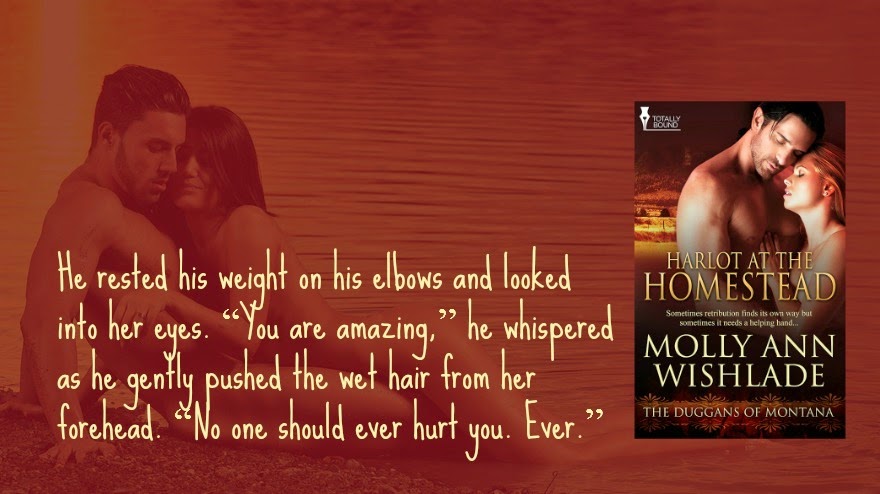 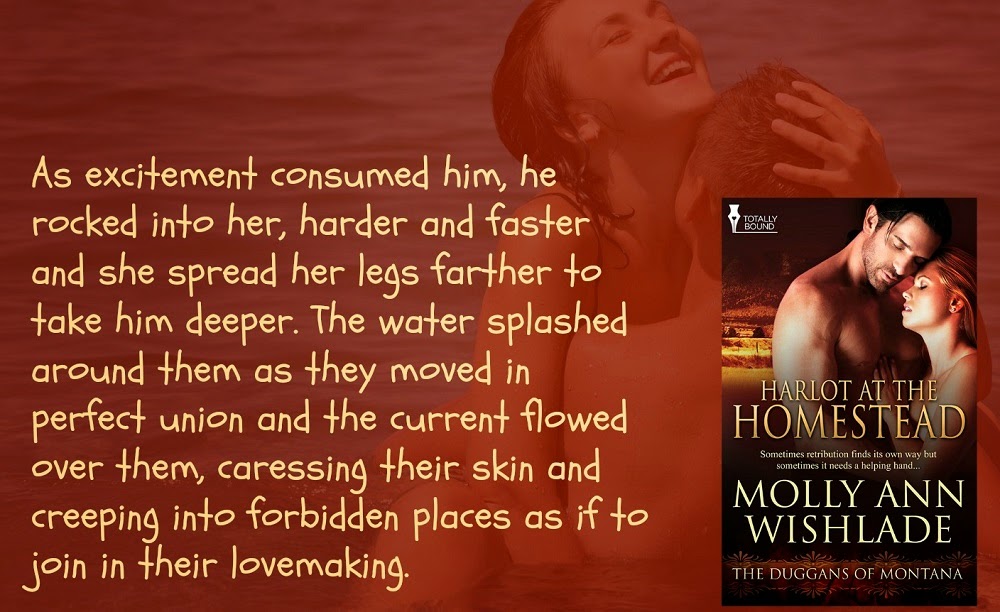 Kenan stopped at a point where the bank grew flatter and the grass gave way to silt and sand. The water was shallow and crystal clear over the stones and Catherine suddenly realised how hot and uncomfortable she felt. High summer in Montana was usually hot and uncomfortable but this year it seemed hotter than hell. Beads of perspiration trickled down between her bosoms and the backs of her knees were clammy beneath her stockings.
“Let’s go in. It looks wonderful!”
Kenan smiled at her. “You always loved to swim, Catherine.”
They removed their shoes and outer garments then stood awkwardly.
“What now?” he asked.
“Just like always!” She chuckled.
His fingers trembled as he unhooked the front of her corset. He let it drop to the ground on top of her dress, then moved closer to her and encircled her wrist with his hands.
Her stomach flipped at the passion she saw in his gaze. He wanted her and loved her still but she had not yet revealed all to him. When she did, she feared that he would cast her aside like a broken saddle or a worn out boot.
“Hey!” He tipped up her chin with a fingertip. “What is it?”
She shook her head. “Nothing, just memories.”
“Good ones I hope.” He sighed as he bent his head to kiss her.
At first the kiss was soft and she relaxed into the warmth of his mouth, the sweetness of his breath. But as he pushed his hot tongue between her lips, she moaned and slid her hands through his hair. She filled her palms and her fingers with it then pulled his head towards her.
As they kissed, he loosened the waistband of her bloomers and she felt them slide down to the floor. The warm afternoon air caressed the naked skin of her legs and fluttered the edge of her chemise. Kenan held her body against the length of his and she felt his erection rock hard against her belly.
She giggled.
“What is it?” he asked breathlessly.
“Perhaps we’d better cool off?”
He looked down at the large bulge at his groin.
“Maybe.”
He shrugged out of his union suit sleeves then slid it down over his legs. Catherine swallowed hard as she stared at his body. The hard cock stood to attention, pointing outwards from the dark curls of his pubic hair and pulling her eyes towards the balls beneath. He was a perfect male and she yearned to become one with him, to take him deep inside her and ride him until they both reached the point of no return.
“Now you!” His voice was husky but his tone was firm.
She undid the button at the front of her chemise then lifted it over her head. It was sheer as gossamer and featherlight. When she met his eyes again, the intensity of his gaze startled her. He looked so fierce, like he was about to explode with need and desire. He took her hand and led her towards the water’s edge. The cool river lapped at her toes and her nipples hardened, making her full breasts tingle.
“It’s freezing!” 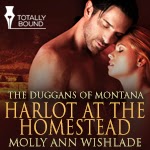 “You’ll get used to it!” He eyed her naked form. He waded into the water until it reached his thighs then turned to face her. Catherine watched as goosebumps rose on his arms and the neat sack of skin that held the essence of his masculinity pulled itself up towards his body.  But his erection still stood firm and ready, the tip shimmering with a diamond like bead of moisture.
In a flurry of excitement, she pulled the pins from her hair and let its vermillion waves cascade down her back. The breeze lifted it and swirled it around her face, teasing her by limiting her view of Kenan.
She flicked her head to push it aside and fixed her eyes upon the man she loved. Unable to resist any longer, she ran to him, splashing the icy water over them both as she did so. The river’s chilly grip travelled quickly up her legs and the tiny hairs on her neck and her arms stood on end.
Kenan grabbed her and pulled her with him into the flow and Catherine gasped as the cold water enveloped her, touching her inside and out. The sensation of the chilly water delving between the hot sensitive folds of her most private place was delicious and it heightened her desire to feel her lover’s cock there too.
“It’s freezing, Kenan!” She giggled.
He laughed then flicked water into her face. She shook her head, her thick hair heavy with the river. He reached out and tenderly spread her hair out so that it floated around her like a gathering of eels come to inspect her nudity.
“Come here!” Kenan embraced her.
Their cold, wet skin and his solid length prodding into her stomach fired her yearning to have him. She wanted to possess this man once more, before he knew the full truth. The fear that he might abandon her when she confessed all darkened her mind for an instant, like a cloud passing over the sun. But she shrugged it away, refusing to allow it to spoil this precious moment. Kenan pushed her towards the bank where he laid her on her back in the shallows. He eyed every inch of her body. The stones and sand were hard and cold beneath her skin but the fire in his gaze warmed her like the hot summer sun.
He stroked his hands over her stomach, across the curves of her hips then back towards the apex of her thighs. She moaned as he parted her legs and ran the fingers of his right hand between her swollen lips then over her aching bud. He rubbed it between his thumb and forefinger with a touch so experienced and knowledgeable that Catherine felt all sense and reason slipping away. Lost in passion, she lifted her hips towards him, eager for him to fill her up as she knew only he could.
Whilst he massaged her, he used his free hand to drip chilly droplets of water over her burning cunny. She flung out her arms and grabbed his shoulders, digging her nails wantonly into his flesh and pulling him down onto her, unable to wait another second. His body moulded to hers as if it were the other half of her and she flung her head back as he drove his erection into her soft flesh.
As excitement consumed him, he rocked into her, harder and faster and she spread her legs farther to take him deeper. The water splashed around them as they moved in perfect union and the current flowed over them, caressing their skin and creeping into forbidden places as if to join in their lovemaking.  Catherine bit into Kenan’s shoulder when the tensing and twitching of her pussy signalled the onset of her climax and her sensitive bud throbbed then burst into countless little explosions like lightning bolts piercing the night sky.
The aftershocks flooded throughout her entire body and her hot juices flowed from her loins. Her excitement spurred Kenan on and he thrust harder and faster before freezing as he reached his own shuddering release.
He rested his weight on his elbows and looked into her eyes. “You are amazing,” he whispered as he gently pushed the wet hair from her forehead. “No one should ever hurt you. Ever.”

Review
My Rating: 3 out of 5 stars

Sometimes retribution finds its own way but sometimes it needs a helping hand.

When Catherine Montgomery shows up at Kenan Duggan’s homestead, she expects him to be surprised. She’s been gone two years and she’s devastated to hear that her former fiancé was forced to give her up for dead.

Catherine never stopped thinking about Kenan and hoped that they’d be reunited one day. She has suffered at the hands of another but nothing tortured her as much as being apart from the man she loves. She doubts, however, that Kenan will be able to forgive her when she reveals her secrets.

As Kenan battles his desire for revenge, their mutual desire reawakens like a creek bed in the rain, and soon they are swept up in rediscovering their all-consuming passion.

Retribution often finds its own way in the Wild West and the men to blame for Catherine’s disappearance may well find themselves paying for their crimes in unexpected ways.

That’s if Kenan doesn’t get to them first!

The blurb of this novelette intrigued me - I decided to give it a go. I'd always loved reading about cowboys and damsels in distress, so what did I have to lose?

And what is it with all the "okays"? I've read books published in and about that era (both the classics and erotica) and none of them ever used that word! It's just so jarring I have to vent.

Characters, however, are a whole different story. While Catherine is so very, very naive and good to a fault,  she's still quite believable. Kenan for me is the most real. He's confused, angry, hurt, and has a need for revenge. He feels happiness when the people who hurt his fiancée are also hurt in turn yet still manages to be kind and magnanimous. I like this man. The other Duggans, Rosie and Matthew, are highly likeable as well.

So would I read this again? I don't think so. The story's not awful, it just doesn't grab me in the way I thought it would. It's a highly probable yarn, but it's not spun my way.