Glutton for punishment would be a good description for Doris... at least that's what she hears on an almost daily basis when people find out that she has a brood of nine children, ranging from adult to toddler and lives happily in a far too small house, cluttered with children, pets, dust bunnies, and one very understanding and supportive husband. Domestic goddess she is not.
There is always something better to do after all, like working on the latest manuscript and trying not to scare the locals even more than usual by talking out loud to the voices in her head. Her characters tend to be pretty insistent to get their stories told, and you will find Doris burning the midnight oil on a regular basis. Only time to get any peace and quiet and besides, sleep is for wimps.
She likes to spin sensual, sassy, and sexy tales involving alpha heroes to die for, and heroines who give as good as they get. From contemporary to paranormal, BDSM to F/F, and Ménage, haunting love stories are guaranteed.
Website | Blog | Twitter | Facebook | Pinterest | Evernight Publishing | Amazon |

Taken by Her Alien Warriors by +Doris O'connor 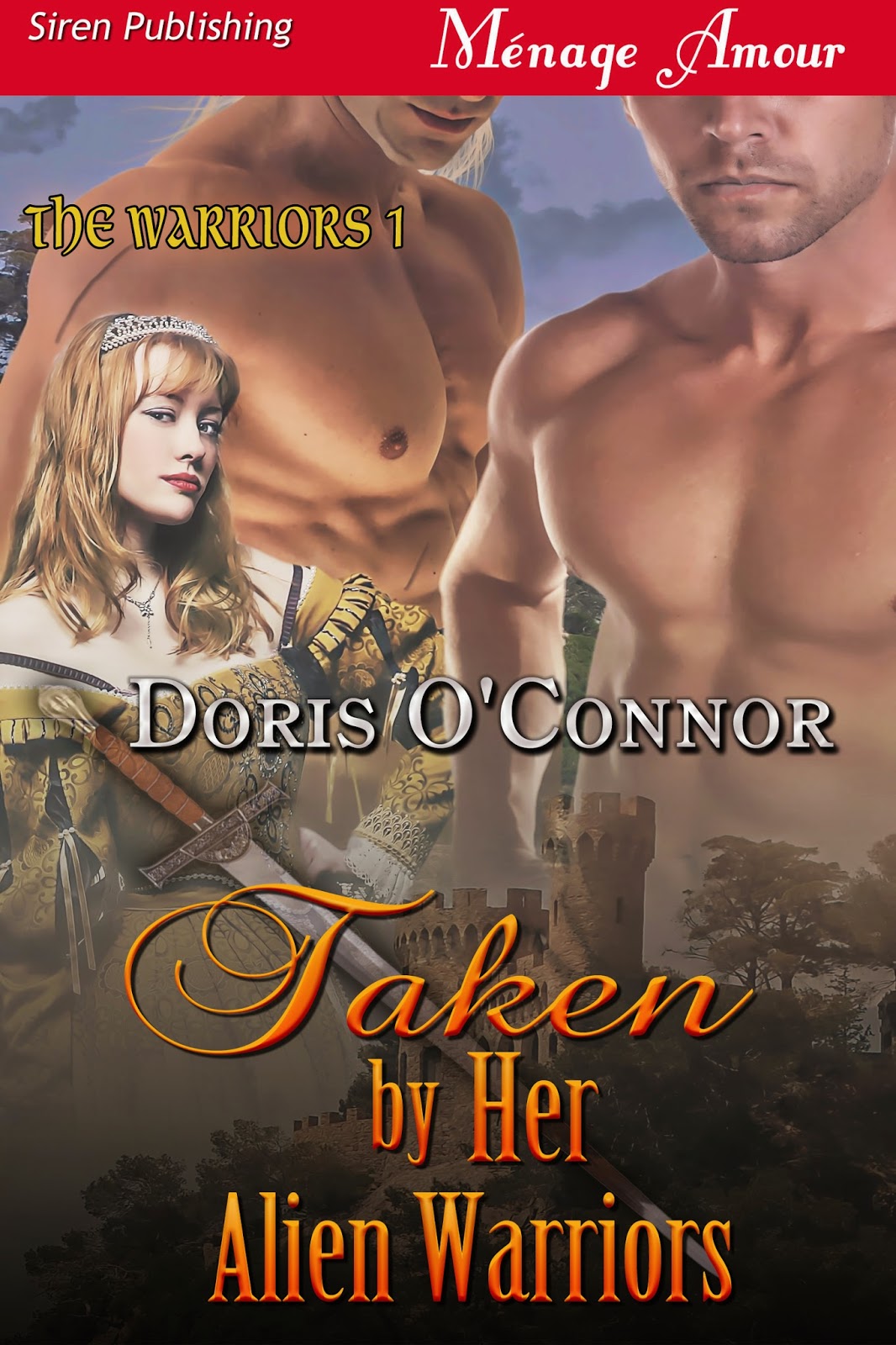 The men of any species have needs…

Hudson has grown up, knowing the truth behind those words, but what happens when those needs pitch lovers against each other in a war torn galaxy?

Warrior Zorran rescued a nine year old Gemini in a rare show of compassion.Twelve years later his slave has grown into a beautiful young woman which he feels inexorably drawn to. However, she is only human and too fragile for his dark desires.  Desires he is certain he can only share with one man—his Drakan lover Ornack.

With Drakan at war with Cirrion the men's relationship seems doomed to failure. Giving Gemini to Ornack will fulfil their emotional needs in a way Zorran can't.

From the minute he sees her, Lord Ornack knows this female is the one woman who can complete their circle, because she loves Zorran as much as he does.

There's only one solution. Claim both his mates and damn the consequences.

Taken by Her Alien Warriors (The Warriors 1) by Doris O'Connor
My Rating: 3.5 out of 4 Stars (Based on our Short & Light Read Category)

There's only so much fictional realism my brain can take, so when one of my favorite authors, Doris O'Connor, publishes a short read titled "Taken by Her Alien Warriors," I know it's the escape from reality that I need!

The story is exactly as the blurb says. Gemini is saved from rape by alien warrior Zorran when she was a child. He claims her as his spoils of war and raises her to adulthood. But he can't bring himself to claim her in other ways and decides to give her to his lover, Ornack, who is in need of a wife.

This is complicated because Ornack and Zorran are supposed to be enemies - their worlds are at war with each other. How to go about this convoluted romance?

While there is angst galore between this trio, I found the storyline light, and fun most of the time! How can you not love a hairy vampiric humanoid or an oversized chameleon alien who looks a lot like a buff Smurf? Toss in a pretty human with a dirty mouth and my day is made.

Interracial sexed-up romance to the core here, although it's not so strange in the light of Star Trek fan fiction. I read it with that in mind and enjoyed myself immensely.

Taken by Her Alien Warriors is a quick enjoyable read that will take you worlds away from where you are. Thanks for so much fun, Doris O'Connor!

“I don’t think I can. Please don’t make me have sex with you.”
Ornack sighed and she visibly relaxed when he straddled a chair several feet away from her.
“Oh, you could,” he said. “And you’d enjoy it. I’m not an ogre, however, nor so uncivilized that I would force my attentions where they’re not wanted.” He smiled at her sharp intake of breath. “Zorran brought you here to keep you safe. I have every intention of making sure you’ll stay safe, but I’ll need your cooperation for that.”
Fresh tears filled her eyes at the mention of Zorran, and Ornack bit back a curse.
“He’ll be back, you know,” he said, and she hugged her arms around herself and shook her head. The action pushed her breasts up and his mouth watered. Soon, he would have her, but not like this.
“He doesn’t want me. If he comes back, it will be for you.” Gemini straightened her shoulders and pushed away from the wall. After only the tiniest hesitation, she sat down in the chair next to him, and this time, when he offered her some wine, she took it.
“You’re not denying it then?” she asked.
“I wouldn’t insult your intelligence, Gemini. Yes, we’re lovers, have been for the last three years, but when he comes back it won’t be to fuck me. Well, not only me, I should say.”
He smirked as her eyes widened and heat stole into her cheeks.
“You can’t be serious.”
“I’m deadly serious. I’m expected to mate, having proven my ability to produce offspring. The problem is none of the females sent my way have shown half as much affection as you’ve shown my son tonight.”
“Then they’re fools. Magnuss is adorable.”
Her instant defense of his little tearaway made Ornack smile.
“You won’t say that when he bounces on your bed before the first rays of the sun have even broken over the mountain peak. Nor when he dive-bombs when you’re least expecting it, or hides a toad in your shoe. The list of his adventures is endless. Gerunda will tell you I was the same as a child.”
“She looked after you too?” Gemini asked.
“Yes, she did, and my father before me. Gerunda is one of the oldest living females of my species. In fact she is the last female born this side of the mountains. We seem to have lost the ability to father females altogether. Other parts of Drakon fare slightly better.”
“And you’re telling me this, why?” Gemini put her goblet down on the table with enough force to slosh the red wine over the sides, and her blue eyes blazed with indignation. “I won’t be your broodmare to help you populate this side of Drakon, if that’s what you mean by needing my cooperation.”
Her breath hitched and she glanced toward his crotch, where his cock was still trying to break out of the leggings he wore, and her nipples firmed into tight little bullets. She squirmed on her seat when Ornack didn’t say anything and simply sat watching her.
She exhaled sharply when he finally spoke.
“No, that’s not what I need your cooperation for, my sweet little human. I need to convince the King that I’m happily settled with my new wife.”
Ornack rather enjoyed the way her mouth fell open in stunned surprise.


* * * *
“Your what?” Gemini couldn’t have heard him right. He must be poking fun at her. That was the only explanation.
Instead of answering her Ornack smiled. It showed his fangs and his arctic eyes crinkled at the corners. Now that she looked at him properly she could see the fine laughter lines around his eyes, and the dimples in his cheeks. Magnuss had the same irresistible indentations. On him they looked cute. On his father, they did strange things to her insides, and she was glad to be sitting. The man was sex-on-legs gorgeous, and he clearly knew the effect he had on her.
Those lines deepened and he reached across to grasp her hand. She couldn’t suppress her gasp of surprise when he lifted her hand to his lips and dropped a kiss on the back of it.
“I told you. Zorran wants you safe, and as my wife, you have standing and protection, and you keep me off the king’s radar. It’s a win-win situation all around.”
“I won’t sleep with you.” She blurted that out without thinking and snatched her hand out his grasp. Much to her surprise he let her and laughed. It was a deep belly laugh that seemed to settle straight in her clit, and Gemini inwardly rolled her eyes at herself.
What was wrong with her today? She loved Zorran, and, yet, she sat here lusting after a man she barely knew, and a gay man at that. Only he wasn’t gay, was he? He’d fathered little Magnuss after all, and there was no doubt that she aroused him. The hard ridge straining the fabric of his tunic looked huge, and once he sobered, the intensity of his azure gaze pinned her in place as though he’d bound her to the chair. And that really shouldn’t turn her on more.
“Oh, you will sleep with me, starting tonight, in fact.”
She shook her head, and his gaze burnt hotter at her denial.
“I won’t … please …. I can’t. I don’t know you. I’m …I’ve never done this before.”
Heat burned her cheeks at her halting admission, but she couldn’t tear her eyes away from the intensity of his gaze either. He’d gone so still, she couldn’t be sure he was even breathing.
“There’s a first time for everything, my sweet.” The endearment rolled off his tongue, and she blinked when he hooked one foot around the leg of her chair and scooted it closer to him until their knees were touching. He gripped the back of her chair either side of her shoulders, and smiled when she pressed back as far as she could, which wasn’t very far at all. She was trapped and the thought of being at this Drakan’s mercy made her breathing speed up.
“I knew he hadn’t touched you. I can smell your innocence.”