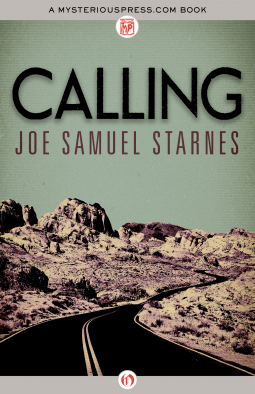 On a bus outside Vegas, a washed-up gambler meets a strange preacher


As the bus rolls away from the Las Vegas strip, Timber Goodman screws his eyes shut and tries to keep his stomach from lurching. He came to Vegas in hopes of jump-starting his fading broadcasting career, but he leaves hung over and dead broke. Beside him sits a preacher in cowboy boots, whose only luggage is a Bible, a bottle of bourbon, and a razor-sharp bowie knife. This is Ezekiel Blizzard Jr., a disgraced man of God who’s got a tale to tell—and doesn’t care if Timber’s listening. As Zeke’s story winds on, Timber finds himself enraptured.
In this sweeping novel of the American South, Joe Samuel Starnes explores the gritty side of faith and shows that all it takes to save a wandering man is another lost soul.

Joe Samuel Starnes introduces a truth with Calling. No matter what church you look into, there are the good and the bad. It doesn't matter which congregation, sect, or even religion, it's a fact that anybody would be unable to deny. There is that needed balance and always the inevitable quandary: Who is saving who?

There is that Christian theory where the Wounded Warrior is best equipped to save souls. It's based on the fact that empathy is more powerful than sympathy - those who have gone through hell and returned are more able to guide others who have simply gone astray.

This is Ezekiel Blizzard Jr.'s public confession, his witnessing, to Timber Goodman of his life in order to bring him back to the church. Or is it?

To those who aren't familiar with the terms, public confession is exactly as it sounds. A person's sins are confessed in front of the church congregation or similar group of people. Witnessing is, to compare it in layman's terms, something like a spiritual AA meeting. "Hi, I'm So-and-So, and I'm a sinner. Let me share with you the wrongs I've done and how Christ showed me the right path to take..."

[While my analogy may seem irreverent, it's only because of the tone taken in this book to make a heavy subject palatable to readers. Confession is a very serious Sacrament for me and I never take it lightly in my personal life.]

But Timber in himself is a questionable person to witness to. I wondered why Zeke picked him. Was there a weakness that he saw that could be exploited? Or was it a true need to save? After listening to Zeke in the first few pages, I saw a doubtful personality masquerading as a preacher. I'm not surprised Timber didn't see it, however. If a person doesn't have a good relationship with his God, what hope of discernment does he have? More often than not, choices become the wrong ones, as his already were.

In the end, to me, it all boils down to a few questions: was Zeke allowed to do all those evil things simply to save the soul of Timber Goodman? And if it's a yes, then has Timber realized the blood price that his soul has cost? Not just the Blood of Christ that saved him from the beginning but the agony all those other innocent souls had gone through simply to reach the culmination of this story. Or is he simply happy thanking God for the good turn his life has taken and is not willing to do more? One wonders how often the storyline of Calling repeats itself in real life...