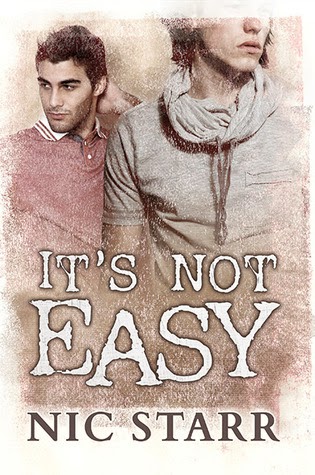 Ben Cooper gave up on following his dreams to keep the peace in his family. Best friend Spencer Henderson has always been Ben’s rock. For Spence, who is in love with Ben, supporting Ben always came first, but as Ben starts to date their friend Suzie, Spence has to think of himself for the first time. The ramifications of one fateful night means leaving their small town may be Spence's only option to protect his broken heart.
With trouble escalating at home and Spence out of reach, Ben finds it harder to cope. Without Spence's help, Ben's life may finally spiral out of control.


Rarely do reads hit home. It's Not Easy hit me on such a level it took me an hour to read, three hours to calm down, and another one before I could even attempt to write this review. Hence the rare multiplier effect on that rating. Thing is, each one who gets to read this will be struck differently. This book is an emotional roller coaster and yet it leaves such a great taste in the mouth when done that, shaky or not, I came out smiling and loving Ben and Spence.


Ben is a self-less individual, he takes after his mom. They both take life in stride, the good and the bad, they bend over backwards to help and just do everything they can to make things easy for others, even if they are not happy about it. They will even go so far as protect others even if it hurts them in the process. Is this good? Is this bad? It is just who they are.

Ben's life is not easy, not with a father like his, but he does all he could to always make the right decisions, even if it meant giving up on his own dreams. He gets through life thanks to Spence, his best friend since they were young. Spence may not be as physically big as Ben but he has such a huge heart and he makes sure Ben has a good life that he comes out larger than life. They had watched each others' backs since as far back as they could remember but when the inevitable happens, there is a lot of soul searching to do and it is painful. For both of them. Unexpectedly, Spence runs and the repercussions are not good. Things are not going well on Ben's side and Spence's absence is beginning to make life unbearable.

This is the debut novella of author Nic Starr. It is incredibly light to read yet it is written in such a way that it feels like a full length novel. It is a story about getting to learn about one's self, finding out some truths, accepting said truths and finally taking that final step to do something to be happy. There is angst, there is drama, but nothing overly done that will get the reader frustrated or overwrought with emotions. Light read as it is, the emotions run true and very real. It did overwhelm me at times - I personally know of a Ben and unfortunately, his dad too - but all that fell away and I just came out smiling with happy tears.

I really, really love this read.


Posted by multitaskingmomma at 12:02 AM