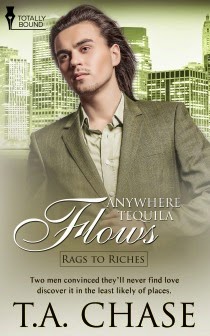 Two men convinced they’ll never find love discover it in the least likely of places.
Sidney Richardson has watched his two best friends fall in love, leaving him to wonder if he’ll ever find the right man for him. Sure, he’s been playing the field since he discovered sex, but he’s never taken a chance on one of those one-night stands to see if there might be more. Now he’s ready, but is the man he’s waiting on ready as well?
Tito Perez has had a rough go of it, but he’s finally in a good place in his life. He’s got a great job and a group of marvellous friends. Who cares that he doesn’t have that one special guy in his life? Some people just aren’t meant to fall in love.
Then a chance meeting between boss and employee gives Sidney and Tito an opportunity to put their hopes and dreams into action. Will love flow as easily as the tequila Tito pours?

So we finally get to read Sidney's story and his crushing on his tattooed bartender, Tito.

Sidney, as we all know, is one of the fab four men who make up the Rags to Riches best friends who all happen to be super rich and handsome and just plain awesome. This is a light hearted series that quickly gives us the romance we crave for with a little bit of fairy tale dust to spice it up.

Sidney had been crushing on his employee for a year and finds himself wanting something that he sees in his other friends: loving and happy lives with their chosen partners. For once in his life, he is finally thinking of settling down and wants to do so with Tito.

Tito gave up his life for his gang only to learn in the process that they would never do the same for him. Wanting to get away for the gang lands he grew up in, he works now as a bartender in one of Sidney's clubs. He had always lusted over his boss but simply because he was the boss Tito refrained from doing anything.

When both men could no longer resist each other, they fall into each others' arms and that was the beginning of their beautiful love affair.

This is a really fast read and surprisingly, this one has less angst happening compared to the first three installments. Whatever drama does rise gets quickly resolved, like, literally, on the turn of the page. Was this disappointing? Not really. For those who like to read angst, they might miss out on it for this one. The author did not waste time involving the plot development in more angst than could be found comfortable in a fairy tale read and this I really liked.

The great thing about this story is that Sidney and Tito get to finally romance each other without fear of rejection. As we read this book, we are immediately made aware that theirs has been an attraction going on for some time, maybe a year, and both men are aware of it. It's just that one is an employee who also is an ex-con, and the other is the employer who is also one of the richest and most eligible bachelors. Typical cinder-fella story, their romance crosses class distinctions and boundaries and more.

A great installment to the series that could be read as a stand alone, but should not be for that would mean missing out on some romantic reads.