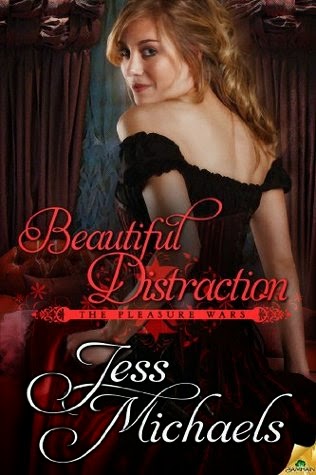 Can true love begin with a lie?The Pleasure Wars, Book 4
It has been a particularly trying day for Olivia Cranfield. Despite her impeccable manners, stylish clothing and posh accent, another protector has detected her lowborn status and rejected her out of hand.
When fellow courtesan Violet invites her to come to Bath to help with the wicked seduction of the scarred, reclusive Earl of Windbury, Olivia jumps at the offer, eager for some excitement and a change of scenery.
The moment Malcolm Graham lays eyes on the delectable woman lurking in the bathhouse alley, he knows she’s a decoy to keep him busy while her friend seduces the earl inside. For a moment, he allows her to play her game…but one touch, and all he can think about is ending the two years of self-denial he’s endured in the name of friendship.
Instant attraction quickly turns into a decidedly erotic affair that makes Olivia question all she’s ever known about passion. But when the truth behind Violet’s assignment comes to light, betrayal threatens to bring everything they’ve built crashing down around Olivia’s broken heart.
Warning: This book contains a lady lying for a good cause, a gentleman as loyal to his friends as he is passionate in the bedchamber, and a steamy affair that will change them both forever.

I was really conflicted while reading this. This is set in the Regency times, when women were second class citizens and those who were independent was almost unheard of. Those who had no security, no name to back them up in society, were either set aside or had to make do on their own. Many who were beautiful and had no other choice became courtesans, those who were not were made to fend for themselves in whatever other means they could. In short, these were not good times for women of independent nature to have lived in. (Forgive me if I am generalizing -ooops!)

Malcolm Graham is the best friend and employee of the Earl of Windbury. Since the death of his beloved in an accident, said Earl had become reclusive and likely to fall into ennui or as we call it now: depression. The times were not good for said Earl and Malcolm had to basically run everything, including his life. When he chances on a beautiful woman, he knows she is a Beautiful Distraction so her friend could seduce his best friend the Earl. However, there is no denying the attraction between Malcolm and Olivia, she is a beautiful woman, independent and seductive. As her role in her friend Violet's scheme surfaces, their passion burns brightly but the trust is absent.

The lies and deceit build up and it is trying for both Malcolm and Olivia. Their love for each other turns more on the desperate side and it was quite a ride reading this. The source of conflict for me was my knowledge that nothing good would come out of their love, even if this does have an HEA ending. Their love does conquer both their fears and mistrust but there is that telling shadow of a doubt they both will not have an easy time in Regent society.