Review: Devil’s Own (The Wheel Mysteries #2) by Susan Laine 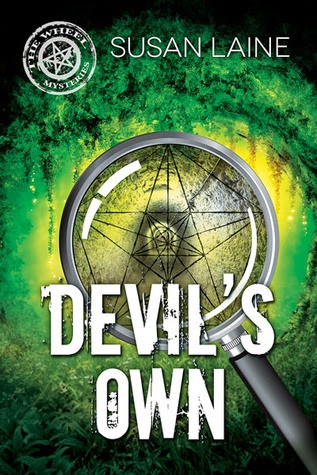 The Wheel Mysteries: Book Two
A month and a half into their relationship, PI Niall Valentine and his occult shopkeeper boyfriend, Gus Goodwin, are hoping for a little time alone, but they’re thrown into another murder mystery.
Niall’s client, Angelina Talbot, is certain her new husband attempted to kill her, ambushing her in their bedroom, half-naked and covered in blood. Scared out of her mind, Angelina hit him with a lamp and ran away. Hugh Talbot lies dead in the bedroom, his head smashed in with a lamp—but the door is locked from the inside. Is Angelina truly an unwitting murderer, or are more sinister forces at play?
With a family of eccentrics, borderline criminals, and Satanists, the real killer could be any number of people wandering the mansion that night under the cover of darkness. The entire Talbot clan thrives in secrecy. Still unfulfilled and utterly perplexed, Niall and Gus are tasked with shedding some much-needed light on the shadowy case.


This is the second book to the Wheel Mysteries by Susan Laine. It opens a month and a half right after the first book, Sparks & Drops (The Wheel Mysteries #1), closed. The relationship between Nial and Gus is getting stronger but they have not gone all the way. Yet. They want to know each other better, get their relationship on a more solid level before taking that final step into a commitment and all that jazz.

Just as expected, Niall's next case comes up, and at first it starts out as a simple wife getting scared and running away from a weirdo of a husband who seems to be dabbling in some Satanic occult thingy. Just as Niall gets into the case, the inevitable murder happens and things get darker, more mysterious, the bodies start stacking up, left and right. The worst thing about it was that the occult is just as deeply involved into this mystery but it is something that Gus has an abhorrence to (and who can blame him!), a fear of (again, who can blame him!) and a lack of knowledge of. Bad.

The involved side characters are not only loonies, but they are weirdos! Some are involved with some sexual practices that are not only sneered at, taboos and such, but also illegal. It is all Niall could do to keep the facts and weirdness straight and Gus trying to help him as best he could even if he were floundering at the bits.

This is a fantastic installment to this series and I just found myself learning more and more of the mysteries of the occult. The way the author handled this, so matter of factly and quite clinically, helped me most. It is a subject that I fear but am curious of at the same time. What really got my full attention was how the mystery was woven. It was intricate, confusing and knotty at times, but at the end of the read, it revealed a convoluted plot that defied reason. Heck, these involved loonies so I am not surprised nor frustrated.

When all was finally laid out and plain in sight, I found there were some loose edges that may set the foundation for that third book and I am just hooked on this series it is not funny. I want the third book now!

This is a mystery, suspense, thriller romance set within the neighborhood of the occult. For those who love to unravel mysteries, this is a great series to follow.