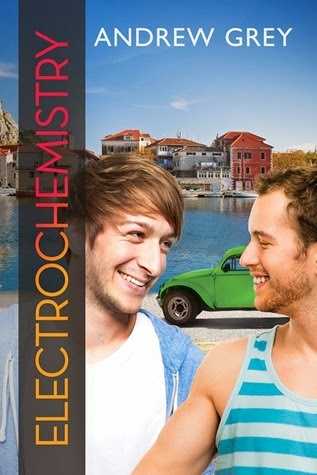 Science major Brad Jergens notices Jordy Fleming at school and at the grocery store where he works, but with the heat Jordy’s boyfriend emits, Brad doesn’t think he stands a chance. When Brad’s parents drag him along on a cruise, he and Jordy literally crash into each other, and the chemistry between them sends sparks flying. Unfortunately, as the weeklong cruise nears an end too quickly, Brad’s left to wonder if their mutual attraction will dissipate on a Caribbean breeze as soon as they return to dry land.

Oh this was really sweet.

I love it when Andrew Grey comes up with a sweet story that was very light and very fast to read. It is almost 200 pages long but it was so lightly written, it felt too short a read and I just lost myself in this.

There is practically no angst to this little story, about two young men who go to the same college. Brad saw Jordy first from a distance then got up close and a bit impersonal in the grocery he works night shifts in. They had no connection at first, what with Brad too shy to say anything but asking how he could help him out and Jordy just too deep in his head to really notice Brad.

Until the two meet on a cruise and they got to spend time together.

Two young men gravitating to each other, the school and lack of other young men around their only two things in common. It was a slow start for them but once they finally did sit down and start getting to know each other and become friends, Jordy begins to realize that there were some things he had taken for granted and one of them was to be treated like nothing. He discovers being treated as an equal was not only better for him, but he finds he does have this right and privelege. Quite an epiphany.


This is one of Grey's sweetest stories and this being Young Adult themed, it was just perfect in its own way. I would not call this an HEA, it is more like an HFN type of story but there are a lot of promises that make the future of the two young men more solid than the rest. It was a great read, short for me as it was. Definitely a must read for all Grey fans like myself and actually a great starting point for those who want to delve into the MM genre for the first time.