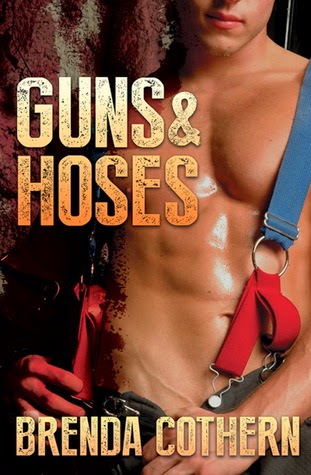 Tigger Flint and Thomas Flame shared an instant mutual hate for one another from the day they met in sixth grade. Their dislike grew into competition and rivalry throughout high school as they were stuck in the same honors classes and played the same sports. That hatred and rivalry followed them into adulthood as one became a cop and the other a fireman.

Sharing the same haunt, Guns & Hoses, gave everyone from both departments plenty of opportunity to witness their personal war. Being forced back onto the football field for charity gave both men another venue for their hatred and rivalry to make an appearance.But those feelings weren't the only emotions in attendance and the winner of game could just be both of them.

This book contains m/m sexual situations and is intended for readers of legal age in the country in which they reside.

Before the Review Note: Guns & Hoses is a bar. It is also a spin-off of the series Undercover Love. There are familiar names and faces here but there is no need to read that series to understand this one.

The bar G&H is a bar considered common ground for cops and firefighters both. They go there to spin their tales, drink their beers or simply have some party time and really a place they all could feel safe and just be who they are: rough and tough guys and gals whose chosen career was full of stress and a lot of danger.

Tigger or Tig Flint is a cop. He is huge, played quarterback in high school and a tough guy. He is danger personified and can be trusted to keep the backs of his team safe. He is a walking time bomb, however, whenever one Thomas Flame walks into the same bar and join his ladder buddies. Flame, a firefighter, is another huge guy and played on the opposite line in football with Tig. Literally an explosion waiting to happen since day one of their meeting all those years ago, like a flint strikes to flame is what best describes these two and everyone knows to either keep them apart or be incinerated.

Then the charity football was happened. And the flint sparked the fire that set the flame to the kindle and from then on, I was not able to let this go.

This was HOT! I have read quite a few tough men falling in love with each other and the erotica would set the pages to flame but most are always laced with sappy romantic lines. This one is just as erotic and yet there is none of the expected sweetness or sappiness found in romance stories. This is a tale between two tough men who were not afraid to say and do what they wanted with and to each other. They had hated each others' guts since they were kids and now they fell into each other and found their equal partners. Quite a slap on their respective faces but once they did find each other, they were not willing to let go.

There is the expected drama, some angst and a few scenes that placed both men in danger. I really liked the fact that the author wrote these two men to be men: silent, taking for granted the dangerous work of the other, and free to play rough and be rough when the time warrants it. Men. Quite a different read but I just fell in love with Tig and Flame and they made me want to dream of them.

This ends on a note that rings: SERIES! There is still a lot to be told and seeing this is sort of a spin off of another series this author pens, then I am all for it. Love my cops. Love my firefighters. Love Tig and Flame.