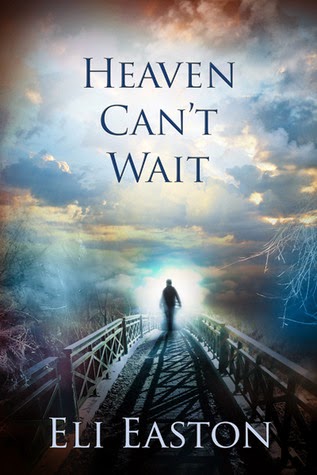 When Brian Matheson dies at nineteen, his soul is in limbo. He has one chance to redeem himself before he’s thrown into a nasty pit. All Brian has to do is save the life of Kevin Anderson, a boy he and his friends tormented for being gay.
Kevin thought he’d finally escaped bullying. But his college roommate, Chuck, and his homophobic pals, prove him wrong. Now he can only wait for another room to open up—and try to keep his eyes off sexy, uber-straight Chuck.
Chuck is struggling to keep up the tough-guy façade everyone expects, but being trapped in a dorm room with the prettiest twink he’s ever seen isn’t helping him keep his feelings hidden.
If Brian can untangle this mess, he’ll deserve his wings.

I saw the title and immediately thought of that movie that starred Warren Beatty and after reading the blurb, hmmmmm..... What has Eli Easton come up with?

This was hilarious, heartbreaking, dramatic and romantic all at once!

So we have one Brian Matheson who finds himself in front of St Peter. He did not know he died but apparently he did and come judgement time, he is found to be in limbo. He is in the grey zone, the zone where he could either do something to get over to the red side and be in hell for the rest of eternity or on the other side, the golden side, where heaven is waiting and probably a second chance at life? First he has to prove himself and within two weeks or off he goes to hell. His assignment: Kevin.

Kevin is an openly gay college student whom Brian had made fun of when he was still alive. Seeing him now though, he sees someone who is sad and miserable and Brian, with his mind opened thanks to the death option, does everything he could to get this guy happy.

Chuck was Brian's best friend since they were children and now the roommate of Kevin. Brian misses him and wishes his friend to be happy. Never in his wildest dreams did he think that Chuck would be the answer to Kevin's happiness too!

The process of getting these two guys together is a hilarious blend of stupidity and idiocy, no thanks to the duh-ness that Brian finds himself constantly thinking in. Brian's attempts to getting things straight all got crooked, to tell you frankly, and it was a comedy of errors until he got things right.


First off, there are no angel wings here, just Brian's assignment from none other than St Peter himself. Second, the philosophy behind this story is hilarious as it is true in a twisted sense - but it was good! The secret to loving this book is to read it with an open mind and acceptance - that Brian's journey to heaven is only delayed because of his own illogical logic. That Heaven Can't Wait to show him the truth of it all and give him a second chance at life is delight to read.Of course, Sto Pedro himself can't wait to show it to him - oh! and neither could Bruce!